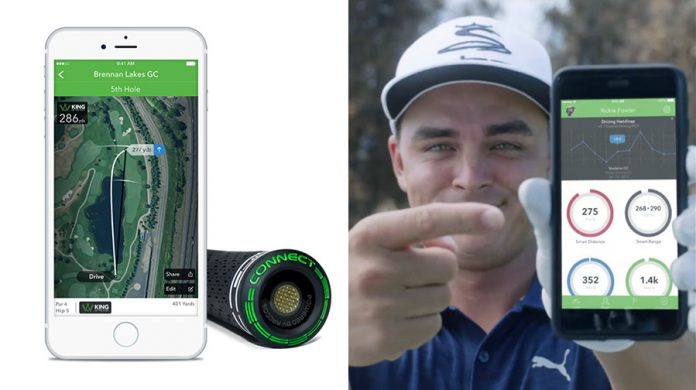 Rickie Fowler is down in Houston playing in the Shell (and doing quite well). Earlier in the week, the 28-year-old star hooked up with the Cobra team to shoot a social-based promo clip for the new Cobra Connect technology.

Fowler doesn’t go too much into detail (to say the least) about how “easy it is” to get the software connected to the club’s embedded sensor (“got the phone on… and we’re connected”), but you get the idea.

From what I can gather, based on my background (fwiw), the sensor seems to connect to the phone via bluetooth. It’s job is to listen for (or “sense”) a shot using some sort of algorithm based on sound and vibration. It then notifies the app that a shot has been struck, which means you likely need to keep your phone close by so it can receive the sensor’s notification (don’t leave it in your cart, in other words).

The phone, itself, is also acting as a GPS to record your coordinates (long, lat) during each shot. The distances would seem to be measured by subtracting your position during Shot 1 from your position during Shot 2 – meaning you actually won’t know the length of your tee shot until you hit your second shot (it would seem). The software (Arccos) processes the data and presents it to the user in a nice visual manner.