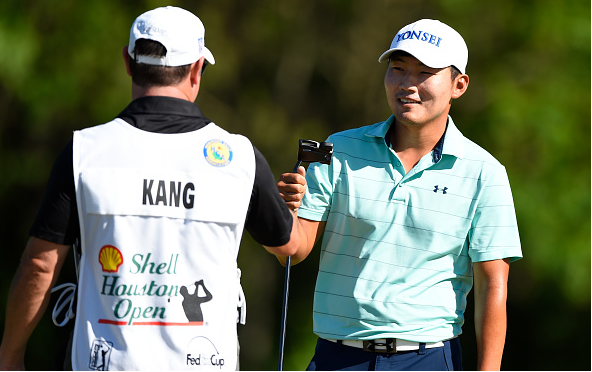 Today feels like old times, as Mike “Fluff” Cowan is on the bag of a player who is running away with a golf tournament, while Tiger Woods is hogging all the headlines and media attention.

No, it isn’t 1999 again, but Fluff is in the ear of a man who is leaving a hoard of high-end PGA golfers in the dust. This time, it’s 29-year-old South Korean Sung Kang; not a household name on Tour, but he’s on the verge of becoming one in Houston.

After chasing a round one 65 with a course record-tying 63 in round 2 of the Shell Houston Open, Kang now holds an incredible six shot lead going into the weekend. The bogey-free round of nine-under-par has turned this tournament into a one-man act, with Hudson Swafford and Russell Henley the closest things to a pursuer among the rest of the field. If Kang can keep this level of outright dominance going, he could be making his first trip to Augusta next week, as the winner of the Shell Houston Open is given the final Masters invite.

How Kang Did It

A performance that has come largely out of nowhere, Kang has been near-perfect over his record-setting first two rounds of this tournament. He is obliterating the field in birdies, with 15 so far, in addition to an eagle he added on 17 today.

His putting has been unfathomably good, as he gained 6.883 strokes on the field putting in Round 2 alone. Kang missed three fewer fairways in round 2 than round 1, but stayed hot approaching the green, hitting 15 of 18 greens in regulation.

Others Shining in Round 2

The closest anyone got to Kang’s second round 63 was Robert Streb, who bounced back from a five-over 77 with a seven-under 65 in round 2. Hitting five more fairways than he did on Thursday was a big reason for the score improvement.

Russell Henley had birdies on five of his first seven on the back nine, and with a round of -5, he played well enough to jump into a tie with Hudson Swafford (who also posted -5 in round 2) for second place.

The list of great golfers who will miss the weekend in Houston would make an incredible team. Jordan Spieth, who will have redemption on his mind in Augusta next week, will have to practice on his own time, as a surprising 5-over 77 left him two shots short of the cut line.

Spieth had only one birdie on the day. Henrik Stenson shot his second straight over-par round, this time a three-over 75, and that number is in spite of four birdies on the day. Matt Kuchar sunk his chances with three double bogeys in his round of 77.

Adam Scott missed the cut by one stroke, while Rafa Cabrera-Bello (+5) and Lee Westwood (+7) missed by a mile.

A Name That Should Scare the Masters Field

Angel Cabrera has basically done nothing on the PGA Tour in the last 2+ seasons. Now ranked 687th in the world, Cabrera hasn’t made a 2017 cut, and in his last 45 events he has finished in the top 20 just once: a T15 at the 2015 Waste Management Phoenix Open. He has earned just $600,000 over the past two seasons, an incredibly low amount for a player of his caliber.

All that being said, those who believe the 47-year-old Argentinian is done being competitive player might want to re-think their stance. After a second consecutive three-under 69, the two-time major winner is tied for 11th place. He has shown in the past that when he has it going, he is a prime threat in majors, and he has a history of playing well at Augusta, winning the green jacket in 2009, and making a playoff in 2013. A fearless competitor on the big stages, there’s no doubt that the Tour is taking notice of how good he has been in Houston this week.

“I putted really good today, teed off in the first tee time today, so the greens were pure. I putted even better today, I didn’t miss any putts today.”
–Sung Kang, second round leader