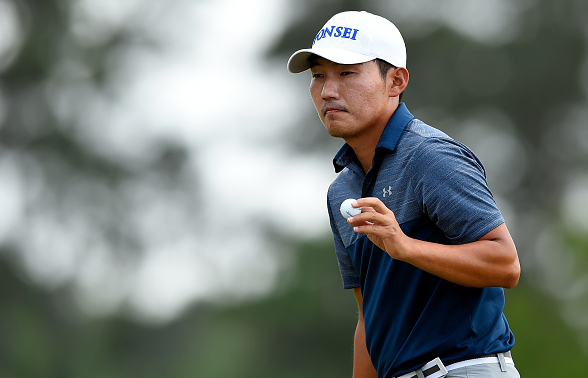 Sung Kang learned today that even when you’re playing well, a large lead can be vulnerable. Going into the third round of the Shell Houston Open with a six shot advantage, the surprise South Korean, who dominated the first two days, briefly lost his entire lead late to world No 9 Rickie Fowler, before a bogey, double-bogey Fowler-finish gave three of those strokes back.

Kang shot a one-under 71 in his quest for his first PGA Tour victory, and a Masters invite, getting him to -17. The 29-year-old Kang will head into Sunday’s final round with a three stroke lead over Fowler, and four over Russell Henley.

Only Fowler, Henley, and Luke List are currently fewer than nine strokes from the lead.

How Kang Did It

Kang lapped the field in the first two rounds, posting 65-63 for a six-stroke advantage. On Saturday, he had the field thinking “here we go again” with two birdies in his first four holes. His last 14 holes finally brought some regression to the mean, as he played that stretch one-over par with two birdies to three bogeys.

Fowler provided pressure to Kang all day, and after playing holes 7-14 in an astounding six-under, Fowler suddenly had a one-stroke lead with just two to go on the day. Fowler imploded on the last two holes, however, and after four-putting on 18, Kang re-gained a three-shot advantage.

Going Low In Round 3

Saturday’s low round came from Luke List, who exploded into contention with a seven-under 65. List birdied five holes in a row midround, getting him to -12 for the tournament, and giving himself a shot at his first career victory. A T2 at the Sanderson Farms Championship in October is his career high finish.

Little known Rafael Campos, who has played just 11 career events, shook off a triple-bogey on 5, and birdied seven of his last 11 holes for a four-under 68. He currently sits in a tie for fifth, but at nine strokes back, he will need a lot to go his way tomorrow.

European Ryder Cup member Andy Sullivan nearly backed himself below the cut line with a four-over 76 in round 2, but was much better in round 3, with birdies on five of his first eight holes, leading to a round of five-under 67.

An early season win got Hudson Swafford into the Masters field, which he should be extra happy with since a three-over 75 on Saturday basically ended his chances of winning in Houston.

Swafford was -10 to begin the day, but is now 10 strokes from the lead. Zac Blair did what he needed to on the first hole, carding a birdie, but that was his only one of the day, and after a three-over 75, Blair dropped from fifth into a tie for 16th.

Jimmy Walker was not in contention to begin the day, but a dreadful Saturday seven-over 79 caused him to miss the round 3 cut. If he wants to win two majors in a row, he will need to play much better at Augusta next week. Walker had seven bogeys and two double bogeys on his card.

“It was very hard. When I was going really hard, the greens got firmer, faster. Fortunately, I got off to a good start today, so that actually helped me out a little bit. It was really hard, I tried to really grind it out today. I did pretty good, I think.”
–Sung Kang, third round leader