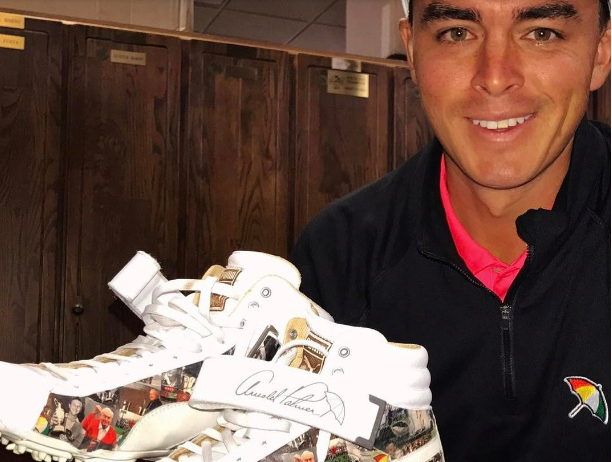 Rickie Fowler is known for wearing some of the funkiest-looking golf shoes on the PGA Tour: Hi-top Pumas, in bright neon colors.

Many of the blue jacket-wearers complain that they’re not real golf shoes, and/or that they’re just plain ugly (as if…).

But this week, we’re pretty sure the wine-sippers will not be, well, whining. Because Fowler is honoring the King in one of the most awesome ways.

Are these things totally based, or what!?

Here’s another shot of Rickie’s kicks.

UPDATE: An even better pic of the kicks.

And the best part is that they’re a limited edition. As in limited to JUST TWO pairs.

Puma made a pair for Fowler, and another pair to be auctioned off, with all proceeds going to the Arnie’s Army Charitable Foundation.

Only 2 pairs were made.
One will be worn by @RickieFowler.
One is up for auction.
Proceeds go to @ArniesArmyCF.https://t.co/RrVIBYohUd pic.twitter.com/UghvKRUNHA

Finally, here’s a clip of Rickie swinging the stick, wearing the limited edition Pumas, as well as a hat that honors the King too.

What a way to remember a legend.
So sick
Yup yup!!?????
Awesome!???
So much respect for the man, and his legend. Well done Ricky!
One of Rikies swag collection.
Dope!??
I mean could you HONESTLY say no, you guys. ? RickieRickkkkkk
I need a pair!
Class Act!??
So dope!!!
Those are Soo Siiiiick?
Those are so pimp!
Toppp shelve
Rickie is the Man! Get it rollin this week @rickiefowler Arnie would be proud
Respect is from the heart, mind and soul… not trample in others footwear….
Gangster ?
I need those?
Such a great tribute!