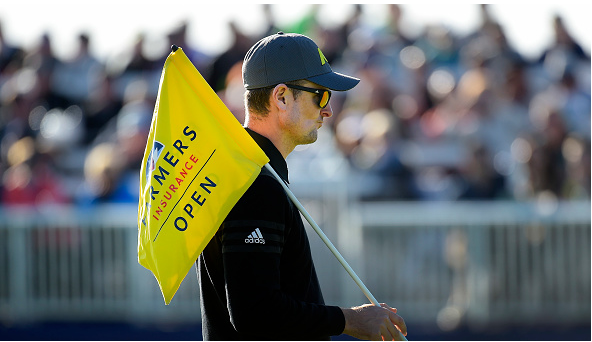 After Justin Rose posted a phenomenal 7-under 65 in the first round of the Farmers Insurance Open at Torrey Pines Golf Course on Thursday, everyone knew his task would be even more difficult on Friday. He was in the half of the draw that got the tougher South Course in round two (not that anything is easy at Torrey Pines), and as expected, he did not do quite as well, posting a one-under 71.

However, that was still good enough to hold the 36-hole lead as Rose has a one stroke advantage on defending champion Brandt Snedeker and recent 59-club member Adam Hadwin going into the weekend.

One of the biggest stories going into the tournament was the strength of the field, but the even-bigger story coming out after two rounds is how many big names missed the cut.

Despite playing on the South Course, it was smooth sailing early-on for Justin Rose, who played the first 13 holes at bogey-free 2-under.

Back-to-back bogeys on 14 and 15, however, prevented him from really getting out in front of everyone else, although his 1-under round was still good enough to stay in the lead.

Expectations were not especially high this week for Tiger Woods, who was playing in just his second event, and first official event, since a 16-month injury hiatus from the Tour.

He had hopes that his incredible history at Torrey Pines (8 wins, including 7 at this tournament) would be a big factor in his favor, but after two rounds, he missed the cut by four strokes. His second round even-par 72 on the North Course was a significant improvement on his first round 4-over 76 on the South Course, so he can at least point to that as encouraging.

It was kind of a quiet day for him – just two birdies and two bogeys. Fortunately for Tiger fans, this is the first tournament of a five-week span where he is scheduled to play four times, so there will be plenty of chances to see if he can improve on what he did in La Jolla.

Hideki Matsuyama, who has been dominant in the 2016-17 season so far, was in danger of missing the cut early-on as he was 2-over for the tournament after his front-nine. However, after a back-nine that included an eagle, two birdies, and no bogeys, the 24-year-old Matsuyama is now at -3, a manageable five-strokes back of Rose.

Derek Fathauer continued his strange Thursday-Friday habit of combining one horrible round with one amazing round, shooting one of those 67s the day after tying Tiger with a first round 76. Incredibly, his great second round was on the South Course, the low round of the day there.

Three players shared the low round of the day – a 5-under 67. One of those was little known Jonathan Randolph who took advantage of being on the North Course to get to -4 for the tournament, which puts him on the periphery of the top-10. Randolph, who has never had a top-10 in 35 Tour starts, shot +1 on Thursday.

Whee Kim looked to be in good shape after a 4-under opening round of 68, but he ended up as the biggest victim of the South Course, as six bogeys, a double, and a triple led to a field high 82. Kim missed the cut by six strokes.

The young Beau Hossler shocked the field in round one, posting a bogey-free 5-under 67 which had him in a tie for first place at one point. His talent was already well-known – he was a man among boys in college and even had strong major championship showings as an amateur – but this is his first PGA Tour event as a professional and he is coming off a brutal shoulder injury that he suffered in the NCAA Championships last June.

Hossler came back to earth a bit on the South Course on Friday, with bogeys on four of his first eight holes to shoot 3-over 75. At -2 for the tournament (T35), however, he is far from being out, but will need to play more like he did in the opening round if he wants to contend.

World #1 Jason Day has had trouble figuring out Torrey Pines. After finishing at +3 through two rounds, Day missed his first cut in a year. His last missed cut? Last year’s Farmers Insurance Open.

This tournament also marked a rare missed cut for world #3 Dustin Johnson, who missed just one in 22 event last season (the PGA Championship).

“I was in control; really good start to my round: I hit the first ten greens in regulation, missed the 11th and made a great save. I had another chance at 13 to go three-under for the round so it was going really smoothly, but then you turn back into the breeze on 14, 15, and 16, and crosswind on 17 and into the breeze on 18, and it felt like, as you turn into the tougher holes, the greens suddenly look bobbly too, or at least it felt that way because when the course got tougher coming in, you’re faced with more six-footers for par, and those are a tough prospect out there.”
–Justin Rose, second round leader