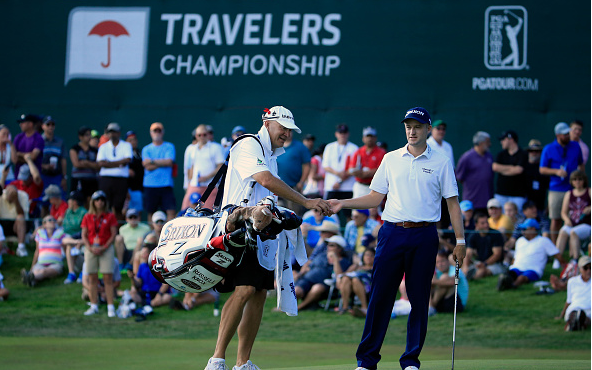 This may surprise many to hear, but Jim Furyk did not win the 2016 Travelers Championship. Furyk got the bulk of the attention and the accolades (and probably justifiably so), but Scotland’s Russell Knox was on top of the event’s final leaderboard, posting 14-under to win by a single stroke.

It was both Knox’s second career victory and second victory of the 2016 season. The win even vaulted Knox into the European Ryder Cup team conversation, although European captain Darren Clarke did not ultimately use of his captain’s pick on him (he probably wishes he had taken Knox over Lee Westwood, who was a disaster at the Ryder Cup).

Unfortunately for Knox, he has struggled to follow up a 2016 season that included two wins and two runner-ups. The 31-year-old was excellent in the fall series, finishing T10, T9, and solo-3 in three events, but does not have a single top 10 since the calendar turned to 2017. He missed the cut at The Masters, THE PLAYERS, and the U.S. Open. He also shot a final round 81 at the WGC-Mexico Championship and stumbled to a 78-76 weekend at The Memorial.

“I got off to a great start in the wraparound year. I contended the first three weeks, really, in Malaysia, China, and Mayakoba, and then it’s been kind of slow since then,” said Knox at a Tuesday press conference at TPC River Highlands. “I haven’t played nearly as good as I expected to. But at the same time, I almost expected it coming off last year, my best year as a pro by a long ways.”

The biggest difference between Knox’s 2016 and 2017 has been his putting, where he dropped from Tour average to well-below average. The worst of it has been on putts from 15-20 feet, which he has only converted 8.96% of the time. That ranks outside the top 200 on Tour.

The 32-year-old Knox says that at this point he’s simply trying to play his way out of this “funk.”

“This game is all about confidence. If you’re starting on the tee kind of worried about your game, you have no chance,” said Knox. “So I’ve decided to play a lot more. This will be my fifth week in a row, and I’m going on to Europe after this to continue playing. I’ve got to try to play my way out of this little funk.”

At No. 57 in the FedEx Cup standings, he is a lock to make the playoffs, but after finishing No. 4 last season, his sights were probably much higher than that.