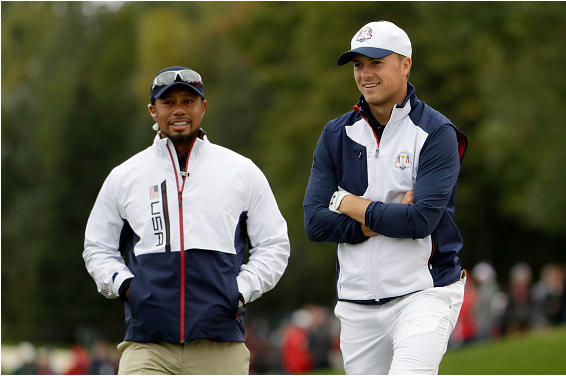 Davis Love III will be looking forward to leading the American team to their first Ryder Cup victory in 8 years. To do just that, he will have to rely on the varying talents of the 12 players who made Team USA.

So let’s take a look at the players representing the United States team, and what they bring to the table – both good and bad.

Known mostly for his flashy clothes, Rickie Fowler has proved on more than a few occasions that his game needs to be taken seriously. It looked like Fowler had secured an automatic spot on the team, but a final round disappointment at The Barclays knocked him out of it, and so he relied on a Captain’s Pick to make the team.

Strength: A popular figure in the dressing room, Fowler gets along well with all the players.
Weakness: Winless in eight Ryder Cup Matches so far, Fowler will need some self-confidence to deliver this time around.

A part of the last winning US Ryder Cup team 2008, JB Holmes also relied on Davis Love to make it to the team. Holmes hasn’t had a very steady season, but delivered some solid performances in a few of the bigger events. Holmes finished in the Top-5 in the Masters, Memorial, British Open and the BMW Championship .

Strength: His length of the tee will surely be an advantage around Hazeltine, which measures a little over 7,600 yards.
Weakness: Holmes is erratic, which might pose a problem pairing him in the Foursomes.

Regardless of his final round performance at the Tour Championship, Dustin Johnson is without a doubt the hottest player on the planet. Johnson is playing the best golf on his life, and his 3-wins and 15 Top-10’s this year shows just that. Johnson has had some pairing issues in the past, but with the current state of his game, he will definitely be a pseudo team leader.

Strength: His new found mental strength will sure pose a challenge to any European coming in his way.
Weakness: His putter does go cold at times, which might pose a problem to the Americans.

A member of four Ryder Cup teams, in today’s age there is perhaps no better grinder on Tour like Zach Johnson. Winless since his British Open triumph last year, Johnson hasn’t been much of a factor over most weekends since then. Nevertheless, Johnson has a strong match-play record and will certainly be a challenge this week.

Strength: Johnson’s putting is his strength, and the quick greens at Hazeltine should suit him just fine.
Weakness: Short of the tee, Hazeltine’s length might be a problem for him.

One of the two American debutants, Brooks Koepka has played most of the year with a lingering ankle injury. Regardless of that, Koepka notched up two runner-up finishes this year and five other Top-10 finishes. It will be interesting to see how Love deals with him, but it won’t be surprising if he’s left out of a couple of matches.

Strength: Length of the tee will be his biggest strength.
Weakness: Koepka is streaky at times, and hopefully for the Americans he’s brought his game this week.

Surprise bronze medalist at the Olympics Games, Matt Kuchar is perhaps the most dependable of the Captain’s Picks. Kuchar raked in nine Top-10 finishes this season. Although Kuchar doesn’t have much of a record at the Ryder Cup, he is fairly easy to pair and is also popular in the dressing room.

Strength: Steady under the gun more often than not, Kuchar will rely on his putter to win some matches.
Weakness: Kuchar unfortunately doesn’t have much of a track record at the bigger events, but hopefully this time he makes his mark

The most experienced Ryder Cup player on the American side, Phil Mickelson will be driving force behind the team this year. Although Mickelson has been a member of only two winning teams in his career, he has proven himself to be a team leader on more than a few occasions. Lefty was a three-time runner up this season, including the British Open where he lost out to Henrik Stenson.

Strength: His stellar short-game will come in quite handy around Hazeltine.
Weakness: Mickelson has one of the worst Ryder Cup records in history, which goes to show that he doesn’t deliver at the matches.

The other debutante of the American team, Ryan Moore couldn’t be making his debut in better form. Including a win at the John Deere Classic, he has four Top-10’s in his six previous start on the PGA Tour. His Playoff loss to Rory McIlroy at the at the Tour Championship made sure Davis Love could justify his final pick.

Strength: Moore has plenty of Match-Play experience, including wins at the US Amateur and the US Amateur Public Links.
Weakness: Not that short of the tee, Moore his highly dependent on his irons and wedge to play well.

The 5-time winner on the PGA Tour, Patrick Reed thrives in the Match Play format. On two occasions he led Augusta State to the NCAA Division I Golf Championship, and was also a semi-finalist at the US Amateur. He was the most formidable American at Gleneagles two years ago. And on top of that he had an extremely good season including a win at The Barclays and a bunch of Top-10 finishes.

Strength: Match Play is his forte and he has plenty of fire inside him.
Weakness: His emotions does sometime get in the way.

Brandt Snedeker wasn’t at his best this year, but still made it all the way to the Tour Championship. Sneaker started out the year very well with three consecutive Top-3 finishes including a win at the Farmers Insurance Open. Missed a bunch of cuts over the Summer, but made it up with two Top-5 finishes during the final stretch to make it to the team.

Strength: If his putter gets going, there is no European who would come close to matching him.
Weakness: Only his second outing at the Ryder Cup, much remains to be seen if he can depended upon.

Apart from Patrick Reed, Jordan Spieth was the other star at for the Americans at Gleneagles two years ago. Since then, he’s won two Majors in 2015 and the FedEx Cup title last September. Spieth had battled out most of the season, which includes two wins, two runner-up finishes and 10 Top-10’s.

Strength: If there’s one player who’ll need to play a big role in breaking the European winning streak, it’s Jordan Spieth.
Weakness: His long-game hasn’t been the best this year, which might pose a problem for the Americans.

Jimmy Walker was very much out of the Ryder Cup debate until his win at the PGA Championship. Walker followed up his win with a solid performance at the FedEx Cup Playoffs. A six-time winner on Tour, Walker will be looking forward to continue where he left off from at the previous Ryder Cup.

Strength: Walker has the distance to battle the longest of the European players at Hazeltine.
Weakness: When he’s not playing well, it’s a major struggle.