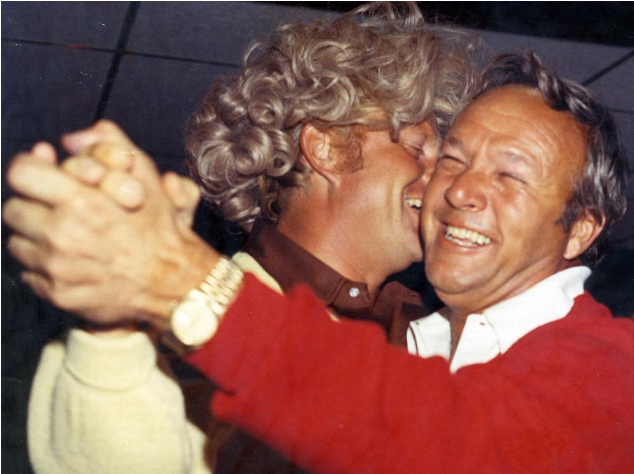 There are just two days to go until the best biennial in all of sports: the Ryder Cup.

Being held in Minnesota, the tournament is drawing a lot of hype. Even Tiger Woods has not been able to hold back on his excitement. In today’s PGW Daily, we look take a look at players and fans talking Ryder Cup. We also talk FedEx Cup leftovers, and a the time Jack danced with Arnie while wearing a wig.

Yesterday, we highlighted the Ryder Cup records of the greatest American golfers. Now, it is time to look at Europe.

One of Europe’s best Ryder Cuppers ever, Sergio Garcia has been on a lot of winning European squads. Despite this year’s squad having six rookies, Sergio is very optimistic and thinks this is one of their best squads yet.

Nobody should be uncomfortable playing with Sergio either, as he is 9-2-2 in foursome matches and 6-3-3 in fourball matches.

The Ryder Cup posted this picture of Hazeltine at the end of the golfing day. It looks like the crews are working around the clock to make this a great Ryder Cup.

First to arrive. Last to leave.

Big shout out to @ct_turf and his Hazeltine Grounds Crew. The course looks amazing! ?????? pic.twitter.com/uozXfVQIts

Gram Of the Day

One current legend to a probable future one, Tiger Woods shows some love to Jordan Spieth as he arrives at practice. This will be Spieth’s second Ryder Cup appearance. He was one of the American Team’s best players in 2014, going 2-1-1, with all 2.5 of those points coming in team play with Patrick Reed.

Spieth is welcomed to the practice range with a high-five from Tiger! #RyderCup #GoUSA

Tiger seems to really be embracing his vice-captain role, something fans have to be excited to see. It feels like forever since he showed anything resembling passion on a golf course.

Warm Up of the Day

Iconic Olympian Michael Phelps did his famous arm-swing warmup before blasting his first tee shot down the middle of the fairway. The Hazeltine crowd went wild.

Michael Phelps did his famous arm-swing warmup before blasting his first tee shot down the middle of the fairway. The crowd LOVED it.

The golf fans at Hazeltine get their chance to pay respects The King, Arnold Palmer.

The Web.com Tour’s Steven Alker busted out some moves after holing a long shot on the 16th at the Nationwide Children’s Hospital Open in Columbus, OH.

Alker is currently 14th on the Web.com finals money list with one week to go. Everyone inside the top 25 will earn a PGA Tour card. Outside of a poor four-week stretch of tournaments from late April to Early June, where Alker missed four consecutive cuts, Alker has played decently, with two top 10s and seven top 25s.

The PGA Tour put out a fantastic video of the top 10 shots from the FedEx Cup Playoffs.

If you were watching the Tour Championship, you know what #1 on the list is. The PGA Tour had to be happy with how the FedEx Cup went, as there was excitement right down to the last hole on Sunday.

Another great video, a magician performed some tricks for the European Team. Ian Poulter put it on twitter:

It has been a tough season for Poulter, who has missed the past four months with a foot injury. He seems to be enjoying his role as a vice-captain, but has to be frustrated to not be playing, as his 12-4-2 record is one of the best in Ryder Cup history.

Sorry to any American followers… but I mean every word. COME ON #TeamEurope @NCGmagazine https://t.co/cPIUW0pFEy

Despite the negative views, the comments on his thoughts have been overwhelmingly positive. At the very least it provides some levity to a tense time of the season.

Speaking of dancing… A funny little story from Jack Nicklaus about the time him and Arnold danced in Palm Springs. Nicklaus said they had so much fun back in the day.

I shared some fond and funny memories of Arnold Palmer this morning on Golf Channel. One of those was out at Palm Springs. After the Palm Springs tournament, there was a jam session every night. All of the celebrities would come in, and the musicians would sing and play music. I remember that both Arnold and I had gone to the bathroom. When I came back, I happened to brush by a lady that had a wig on and I knocked it off her head as she was sitting at the piano. Arnold picked it up and put it on my head and took me out to the dance floor to dance. I switched it around and put it on his head, and I led the other way. We had a good laugh about it, but the poor lady was mortified, obviously. We had a lot of fun like that. That was a great picture. Link in bio for the full interview. ?? @golfchannel #arnoldpalmer #arniesarmy