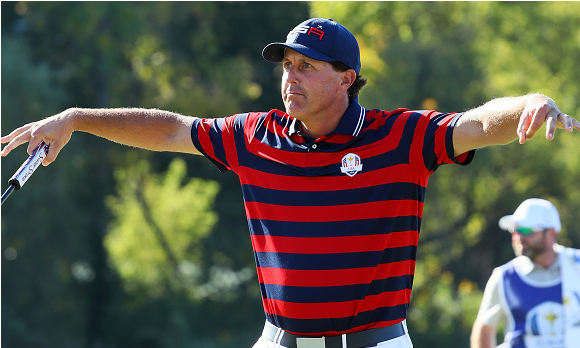 The United States led the 2016 Ryder Cup after Friday’s rounds, but still walked off deflated after a 4-0 rout was cut to a 5-3 lead. In Day 2, the matches were much more split, but a strong fourball circuit from the Americans moved the lead to three points going into Sunday Singles.

The Fowler/Mickelson pairing dropped their first match of this Ryder Cup, after going 1-0 on Friday with an early win over FedEx Cup Champion Rory McIlroy and Andy Sullivan. McIlroy/Pieters got off to a hot start and were 3-up through 5. For the second straight day, Fowler/Mickelson rebounded from a poor start, cutting the deficit to one on the back nine, but they lost 14, 15, and 16 to lose the match 4&2. This was the second straight win for the McIlroy/Pieters pairing after they dismantled Dustin Johnson and Matt Kuchar on Friday afternoon.

The Snedeker/Koepka pairing becomes the first to get two points for the U.S. after they were the Americans sole win in afternoon fourball. Stenson/Fitzpatrick battled back to square the match by the 12th hole, but hit a wall late in the round, as Snedeker/Koepka won 13, 15, and 16 to close out their victory. Stenson surprisingly fell to 1-2-0 after the Olympic Power Pairing of he and Justin Rose split a series of two matches against Jordan Spieth and Patrick Reed on Friday.

Europe put together an interesting pairing here, putting Ryder Cup rookie Chris Wood, who sat out both session on Friday with Justin Rose, who has played every session so far. This match was dead even, halving the first six holes before Rose/Wood got out one ahead on seven. In their match yesterday against Sergio Garcia and Martin Kaymer, Walker/Z.Johnson looked like they were shot out of a cannon with a back nine surge, but were unable to replicate that match in this one. Rose/Walker never trailed and held off the Americans comeback attempt, only the second match of the tournament to reach hole 18.

This match was a microcosm of the tournament so far. Reed/Spieth got off to a tremendous start, being 4-up as late as the 12th hole, but they let the Europeans get right back into it. Garcia/Cabrera-Bello won 13, 15, 16, and 17 to square the match, and would have pulled off the comeback victory if it wasn’t for a clutch putt by Reed on 18. Spieth, Reed, and Garcia were all 1-1-1 going into afternoon fourballs.

For the second week in a row, Rory McIlroy has gotten one on Dustin Johnson, except this one does not earn him $10 million. McIlroy/Pieters got off to a fantastic start, hitting 4-up by the back nine. The Americans twice got the deficit down to two, but could not get any closer.

It has been a tough weekend so far for Willett and Westwood, who lost thier Friday matches as well. Westwood has the most experience of anyone in the tournament, but that has not done much for him so far. This one was close all the way through, with the U.S. getting the final lead at 17.

It was a day of redemption for Matt Kuchar, who was dreadful in defeat on Friday afternoon. Paired with Mickelson this time, who is playing his 11th Ryder Cup, they won holes 3 and 4, and while Kaymer/Garcia were able to widdle down the lead a little, the U.S. kept hold.

This is the third time this same match has been played, with Reed and Spieth taking two of them. Reed and Spieth bounced back for after a disappointing tie earlier when they blew a large lead late against Sergio Garcia and Rafa Cabrera-Bello. The Americans got hot on the front nine, winning 5,6,7,and 8.

“I knew I had it. Just one of those things were every time I had a pressure putt, and that kind of situation, I just think of all the time practicing those on the putting green and try to get as much positive thoughts I can possibly in my mind on putts like that because without having that on the line, it’s just a normal putt. They’re never the easiest so you have to find a way to make them easy.”
–Patrick Reed, talking about the putt that halved his match with Spieth in morning foursomes