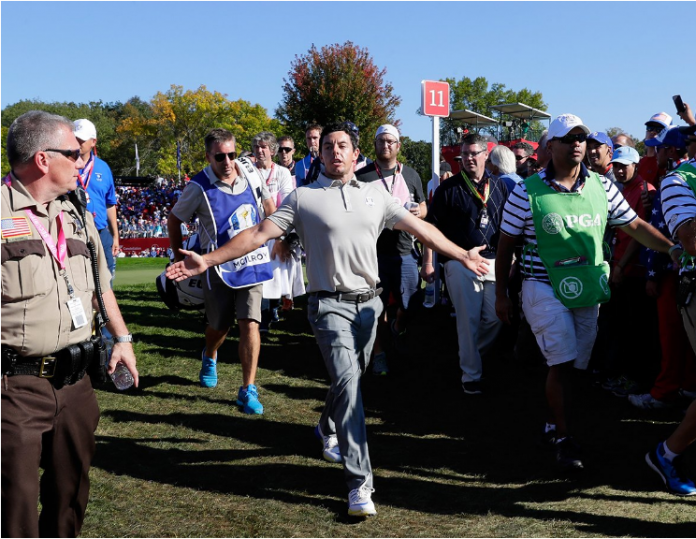 The final Ryder Cup matches will begin at noon (EST). The Hazeltine crowd is getting oiled up, and already packing the stands. And on Twitter the hype is just beginning.

(We’ll be updating all morning, until tee off.)

Two hours before the first match tees off, and Hazeltine is rocking #RyderCup pic.twitter.com/ekoJeSSmY7

At the gates for opening. #RyderCup fans are nuts. pic.twitter.com/dShcUIVsOB

Here’s a round up of some of the best. First the serious stuff.

#RyderCup Singles Sunday Pin positions. Handy if you are watching on TV or listen to on @bbc5live #EnjoytheGolf pic.twitter.com/KJ52QD4a97

15 minutes until we get going at Hazeltine. ⛳️

Inside the media room.

Looking forward to a fun day at the #RyderCup pic.twitter.com/AEzeFY3xik

The pathway to the first tee is pretty cool.

There will be a few more fans in the seats when the players make this walk later today. #RyderCup pic.twitter.com/M6o8XKsOhq

Minnesota is hockey country. I little nod to Jim Craig. Do you believe in miracles!?

Are you pumped up yet!?

Everyone is excited for Patrick Reed v Rory McIlroy. Posing and flexing galore.

Patrick Reed approaches the Practice Tee with Rick Astley's "Never Gonna Give You Up" blaring from the 1st Tee. #RyderCup

The U.S. would seem to have pretty good odds. That’s a 78% prediction.