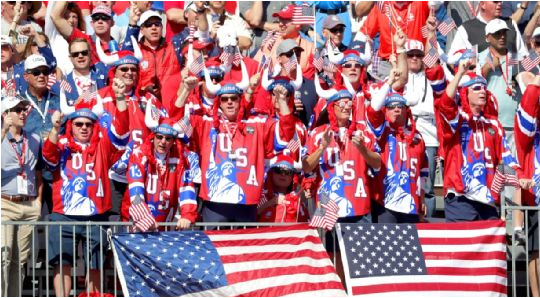 The golf fans at Hazeltine are without question pumped up, and quite rowdy. And while some have gone overboard, the vast majority have been well behaved, while (loudly) cheering on their country in what is golf’s biggest event.

And for that, the whining on Twitter from the Euro golf fans has been relentless – starting yesterday, and all through today.

Reading tweets from European fans about the US fans at the #RyderCup is the main reason I want the US to win. #LightenUpNancy #JustAGame

With Donald Trump’s presidential campaign primarily built around nationalism, many of the Euro whiners took a shot at Trump for the crowd’s boisterous patriotism – and their chanting of “Brexit.”

Watching the #RyderCup listening to this crowd it's not hard to see why Donald Trump could be their next President.

If we win Ryder Cup Trump will blame Clinton, if they win he'll take the credit #RyderCup
Come on #TeamEurope

The Yanks at the golf deserve Trump #RyderCup

Americans yelling 'CHEESEBURGER' at the #RyderCup will almost certainly vote Trump. Someone please round them up and sterilise them.

This #RyderCup crowd will vote for Trump.
That's not a compliment

Listening to some of the US fans at #RyderCup easy to see why Trump is in the mix for president ?

If you can't understand how Donald Trump can have a chance of being elected president of the USA, put the golf on. #RyderCup

Hearing the crowd at the Ryder Cup it's not hard to see why Donald Trump might soon be president…. #RyderCup #usa #Europe

A new american breed " GOLF HOOLS" galore at the #RyderCup  – Now i know how Trump could get that far.

The people incessantly screeching "YOO ESS AYE!" at the #RyderCup are the same people who are voting for Trump.

4-0 sweep for the USA and it sounds like a Trump rally out there. #RyderCup