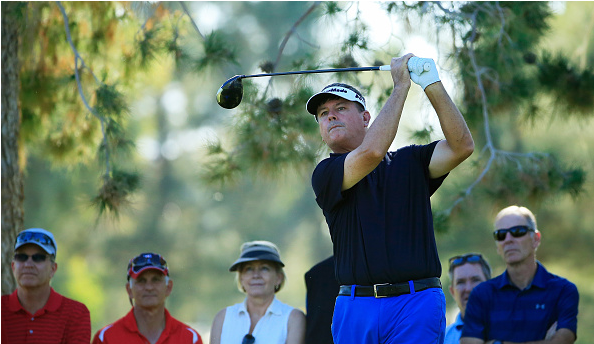 Paul Goydos fired a 5-under 66 on Saturday and will take a one-shot lead into the final round of the Charles Schwab Cup Championship. 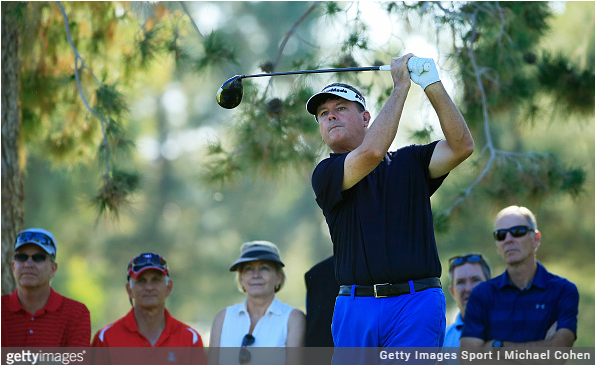 Goydos, the tournament’s defending champion, finished his second 18 at Phoenix Country Club with six birdies and one bogey en route to a two-day total of 12 under.

The Long Beach (CA) native has a win this season, but otherwise has done little. In his 21 other starts, excluding the team format at the Dick’s Sporting Goods, Goydos has just one top 10, and has finished outside of the top 30 more than half the time.

Yet, despite it all, the 53-year old Goydos is 18 holes away from winning the “season-long” Charles Schwab Cup, and its prize of $1 million.

“Mathematically, I think most people say there aren’t enough outcomes to really see a trend yet, but I’ve been happy with the way I’ve played when I’ve had a chance. Things have worked out,” said Goydos.

One back at 11 under is Lee Janzen, who posted a 4-under 67 to get to 10 under and sole possession of second place. He will join Goydos in Sunday’s final pairing.

Janzen, who is winless on the season, with just three top 10s, will enter tomorrow’s final round with a statistically stronger chance to win the Cup than Bernhard Langer, who won seven tournaments, and was the season-long points leader.

“Yeah, any win would be great,” said Janzen, when asked if a win tomorrow would be his best on the senior circuit. “I don’t have enough wins on the PGA TOUR Champions to say any of them are better than the other one. I’ve got one, so that one’s the best one right now.”

Kevin Sutherland shot a low-round 63 and is T4 alongside Billy Mayfair (65) at 10 under. Sutherland is also winless on the season, yet could capture it all tomorrow, even without a win.

“I played good, got myself back in the tournament. But you’re going to have to go out and probably shoot something similar to that tomorrow. You know that going in, so that’s just the way it works,” said Sutherland.

“This golf course doesn’t hide where it wants you to hit the ball. You kind of follow the line of the trees and you’ll be okay. Yeah, I mean, you need to drive it good. I drove it better today than yesterday.”
–Paul Goydos