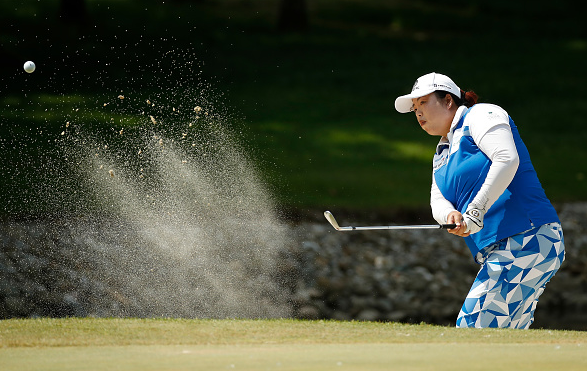 Shanshan Feng posted a 4-under 68 in Sunday’s final round to win the LPGA Volvik Championship by a stroke over Minjee Lee (65) and Sung Hyun Park (66).

It was Feng’s seventh career Tour win, and first of the season. The Chinese star finished her four rounds at Travis Pointe Country Club with a 19-under 269 total.

Feng was up actually up four with four to play but after a bogey on 16, coupled with a birdie by Lee on 17, the 27-year-old’s lead had been cut to two with two to play. She would finish par-bogey and hold on for the one shot victory.

The LPGA Tour’s traditional selfie from the winner.

“I was trying to win the tournament since the start today and I’m glad that I did it. I’m really happy to have this win because I’ve had six wins on the LPGA so far but only two in the U.S. So I’m really happy that I’m not only playing well in Asia but also in the U.S, and very glad that a lot of the Chinese came today to actually come support me.”
–Shanshan Feng, 2017 LPGA Volvik Champion