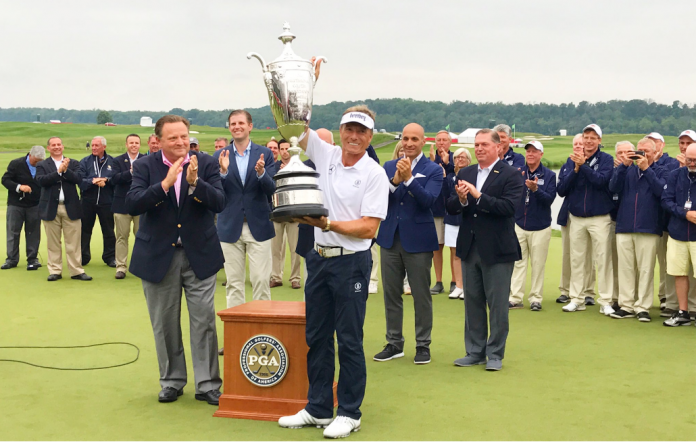 Bernhard Langer posted a 4-under 68 in Sunday’s final round at Trump National to win the KitchenAid Senior PGA Championship by a stroke over Vijay Singh (70).

Through 15 holes, the two Hall of Famers were deadlocked at 17-under. But after Langer birdied the par-4 16th, and Singh bogeyed the par-3 17th, the German star suddenly had a two shot advantage heading into the par-5 18th.

Big birdie by Bernhard, and he's up 1. 2 to play. #SrPGA pic.twitter.com/xYyqMiCB62

A long birdie putt by Singh made things interesting, but Langer calmly dropped his putt for par and made history.

Langer finished his four rounds at 18-under 270. With the win, Langer becomes the first player in history to win all five senior majors, and passes Jack Nicklaus (8) on the senior major championship list of with nine.

Singh’s 17-under 271 total was the best Senior PGA Championship score for a non-winner in the tournament’s history.

The 59-year-old Langer is a combined 113-under-par in nine senior tour events this season.

The historic putt for par to win the 2017 Senior PGA Championship on 18.

On the Match with Singh

“He played realy good. He played extremely well. He just had a bad time with the putter… It was a great duel all day long. It was back and forth until the last three holes when I got my nose in front.”

On the Meaning of the Win

“It means a great deal. We play to win tournaments, especially majors, and now to have surpassed Jack Nicklaus in the majors on this tour is pretty unique. And to win back to back majors is really hard to do.”

“I’m just so blessed. I was carrying this Bible verse around with me from Proverbs 3:5-6. If I can just read it real quick: ‘Trust in the Lord with all your heart and lean not on your own understanding; in all your ways submit to him, and he will make your paths straight.’ That doesn’t mean I’m going to win all the time but it does mean he’s by my side and I can rely on him. And golf is my secondary thing. My faith is number one and its just awesome to have been out here for this long.”

"To win back-to-back majors is really hard to do."

But that's exactly what Bernhard Langer just did. #SrPGA pic.twitter.com/5qHX1nFN8b