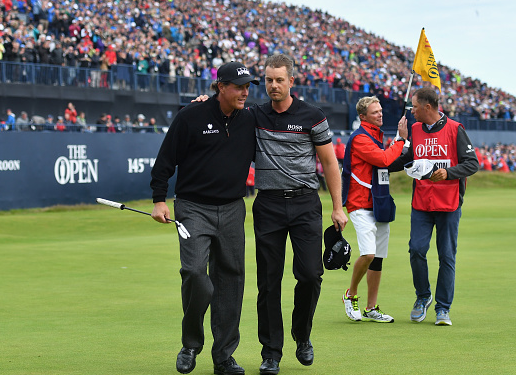 It was an instant classic. A duel for the ages. Two men standing hundreds of miles above any other challenger. Both men were flawless, neither could lose. Except, somehow, someone did lose.

Phil Mickelson’s final round was absolutely flawless. Accounting for pressure, Phil may have been even better on Sunday than he was on his historically-good Thursday, when he shot a major championship-tying record 63, a 63 that was millimeters from being the first ever 62. He drove great, he hit his irons great (T3 in GIR), he putted phenomenally.

Starting the final round one stroke back, Mickelson had four birdies, an eagle, and zero bogeys for a six-under 65. That six-under for this round alone matched what the third place finisher had for the entire tournament. It was some of the finest golf the 25-year tour veteran has ever played.

And he lost. By three strokes.

This was the first time the 40-year old Stenson had ever begun a final major round with the lead. If he felt any pressure, he did not show it.

Like a 70s heavyweight boxing match, Stenson and Mickelson traded ferocious blows for 14 holes. The lead changed hands several times, with neither getting more than one stroke ahead of the other.

Then on 15, Stenson landed a ravenous uppercut to Phil’s 46-year-old jaw, when he drained a 51-foot putt from off the fringe.

That put Stenson up two, and that lead would not be relinquished, as he finished birdie-birdie-par-birdie.

As amazing as Phil was, there was no coming back from that. Stenson was just too dialed in, too focused, and his rapacious desire for the Claret Jug was just too much.

As his long birdie putt curled in on 18 for an unthinkable 8-under 63, Stenson exploded with joy. He was finally a major winner.

“It’s awesome!” said Stenson. “I’ve been so focused this week, this day in particular. I was trying to stay in the moment and do my stuff out on the golf course. I felt like it was my time. I believed it was my time. I managed to pull through, and have a great finish, and beat Phil by a few shots there. Its as tough. I knew it would be tough, and it was a battle until the end.”

Not only was this Stenson’s first major victory, but it was the first in any major for a male Swedish-born golfer. The impeccable final round 63 was an emphatic finish to an astonishing tournament for Stenson. His 264 was the lowest final score in ANY major, eclipsing a mark held by Greg Norman.

There can’t be too many good things said about Stenson’s round. He went in with a 32, and out with a 31. He birdied TEN holes. He made clutch putt after clutch putt, which was a surprise for a man who ranks 138th on tour in putting averageanny Willett Masters For the week, he was T4 in total putts, in addition to being 5th in fairways hit, and an overwhelming first in greens in regulation. With that kind of performance, Mickelson knew he didn’t lose this tournament as much as Stenson captured it, but he said that the loss was still difficult to swallow.

“It’s disappointing, but he played incredible golf.” said Mickelson. “I threw as much at him as I could and he didn’t make any mistakes. He made 10 birdies. It was just incredible play, and what a great champion he is!”

As for the rest of the field, they appeared to be playing a completely different tournament. J.B. Holmes finished in third place at 6-under, an eye-popping 13 strokes behind Mickelson and 14 strokes behind Stenson. Steve Stricker finished 4th at -5, and the trio of Rory McIlroy, Tyrell Hatton, and Sergio Garcia rounded out the top five at -4.

This was the third major in a row that yielded a first-time major champion: Danny Willett at The Masters, Dustin Johnson at the U.S. Open, and now Stenson at The Open. The year’s fourth and final major takes place in two weeks at Baltrusol Golf Club in New Jersey. Coming in red hot, Stenson and Mickelson are likely to be favorites going in.

“I Won the PGA, So….”: Phil Mickelson Laughs Off Poor Round at Colonial