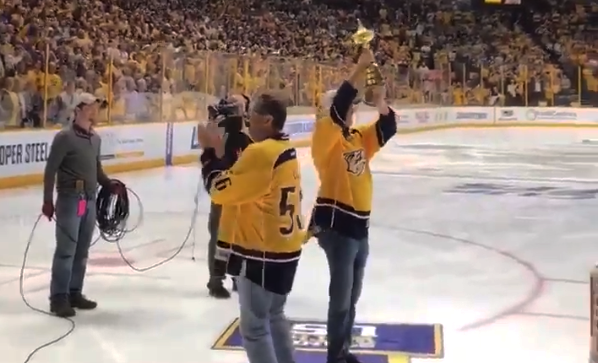 I still can’t believe the Ryder Cup was seven months ago, it feels like it was just yesterday. Anyways, it’s Brandt Snedeker’s week to hang with the beloved trophy.

Snedeker brought it to his hometown for the Nashville Predators game. Wearing a Preds jersey, Snedeker first showed off the Ryder Cup trophy to the Music City fans, and then did the famous towel wave.

Here it is! @BrandtSnedeker brought out some special hardware and got the fans in #Smashville ready for the @PredsNHL, @StLouisBlues game pic.twitter.com/Nc6EGPkN9Q

The Predators went on to win the playoff game against the St. Louis Blues. I’d like to think that’s because the winning Ryder Cup team was behind them.