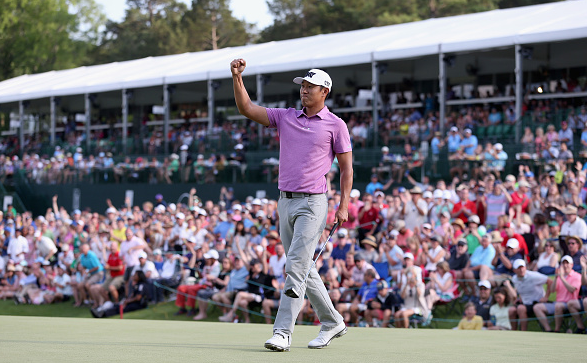 James Hahn showed incredible resiliency at last year’s Wells Fargo Championship. His game was in shambles going in, having missed his previous 8 cuts, but he rededicated himself after an encouraging meeting with his caddie, and not only did he turn his game back around, he won the whole thing. It was an inspiring tale of what the human mind is capable of.

Since that victory, the 35-year-old American has played plenty, but has not seen many leaderboards. Hahn had mixed results in the 11 PGA tournaments post-Wells Fargo. On the positive side, he missed just two cuts in that stretch. He was also tremendous at an elite-field event, the Deutsche Bank Championship, shooting three rounds in the 60s and finishing T5.

On the flip side of that, the T5 was his only top-20 in that stretch, as a T24 at the BMW was his only other finish inside the top 40. While he was making more cuts and getting award more paychecks, he had a span of seven consecutive tournaments finishing over par.

The 2017 season has been more of the same for Hahn; he is making cuts (10 in 14 events), but not contending. A solo-ninth place finish at the CIMB Classic in late October is his only top 10.

Since the calendar flipped over to 2017, his best finish is a T22 at the SBS Tournament of Champions, which only hosted a 32-man field. He has not finished in the top 40 since a T28 at the Genesis Open in mid-February.

A return to Quail Hollow might have been great for his confidence, but with this year’s edition being played at Eagle Point, his 2016 victory is less of an advantage that it would otherwise be.

Hahn has been fairly average off the tees and on the greens, and is hitting greens at a positive rate, ranking 41st on Tour in greens in regulation. His big weakness in 2017, however, has been around the greens. He has especially struggled scrambling from the rough, getting up and down just 47% of the time, which ranks a dismal 198th on Tour. He has been mostly accurate, but has a proclivity for compounding his errors further.

Hahn is definitely entering the Wells Fargo with a higher profile than last year. Going into that tournament, Hahn had fallen to 134th in the world. Currently, he is 81st.

While it is a different course, he should still be able to conjure up some good vibes by drawing off his past experience, remembering that he has emphatically pulled himself out of slumps in the past.