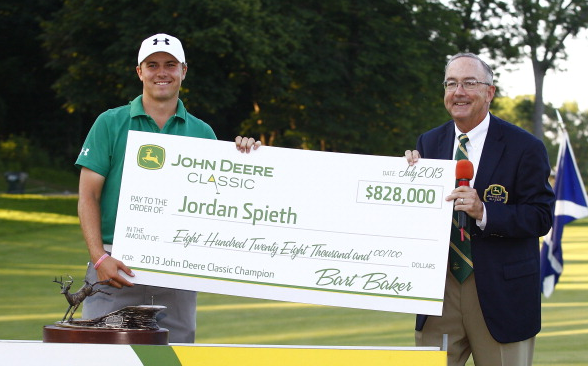 To the casual sports fan, the 2013 John Deere Classic marked the emphatic introduction of Jordan Spieth to the world of professional golf.

One of the most memorable shots in recent memory, a Sunday bunker hole-out on No. 18 from Spieth forced a playoff against Zach Johnson and David Hearn. Five playoff holes later, the 19-year-old Spieth was in the record books, becoming the first teenager to win a PGA Tour event since 1931.

Spieth, who was not yet the worldwide brand we know today, made a return in 2014 as the defending champion, with the John Deere still his only Tour win.

In 2015, now as the reigning Masters and U.S. Open champion, and a legit superstar, Spieth showed his appreciation to the tournament by returning despite it being scheduled the week prior to the British Open.

At the time, Spieth remarked that the Deere was not considered a conflict.

Spieth, of course, went on to win his second John Deere title, and then finished one-shot from a playoff the next week at St Andrews.

In 2016, now as a full-fledged superstar, the tournament’s defending champ skipped the event, despite no scheduling conflict. Spieth gave the impression that he “would be back soon.”

“Soon” ended up not being 2017, as Spieth announced on Monday that he will not be at TPC Deere Run this year either.

Prior to Spieth’s decision, the tournament was using Spieth’s shoes as part of its promotions.

Yes, those are custom JDC @UnderArmour Spieth Ones.
Yes, they are signed by @JordanSpieth.
Yes, you should be jealous ?
(Thanks Jordan!) pic.twitter.com/f6BY0HdUXh

A few days later, after the decision, the JDC wished Spieth well.

We will miss you next week @JordanSpieth – Good luck at The Open!https://t.co/cXrCyjCcOp

The golf fans, however, weren’t as understanding, or as politically correct.

“The Golden Child is now too golden to play the Quad Cities Open, now the tractor thing. He is now going for the gold as in major championships. What is is!”
–Via Facebook

“Tournaments may grant a few special exemptions to allow players into the field who would not otherwise be eligible to play. Spieth played and was fortunate enough to win. While the Quad Cities is a really good venue, great course and facilities with terrific fans; it is not considered to be a tier 1 tournament. Consequently, the Quad Cities is always struggling for a very competitive spot on the schedule. The tournament uses promotions including having past champions and top ten players in the field to attract sponsors and fans. For Spieth not to play is damaging to their future. They extended a favor and it has not been returned. The greats of the past ( Jack, Arnie, Player, Trevino etc) respected the tournaments and sponsors and worked to support the tournaments.”
–Via Golf Channel

Don’t Let the Door Hit You…

"Jordan Spieth is probably not coming to the john deere classic."

You can just leave, but take your bad attitude with you.

“I love the tournament, I love the golf course and, more importantly, I love the people. While my schedule doesn’t permit me returning to the Quad Cities this year, I plan to be back in the future.”
–Jordan Spieth