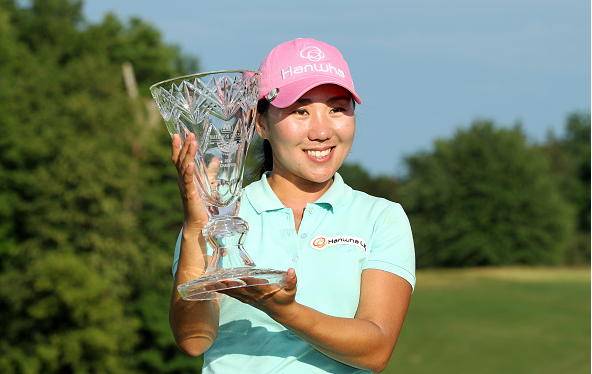 Despite a leaderboard that was filled with Americans for much of the first three rounds, it was once again a South Korean who took home the LPGA Tour’s trophy.

A week after Sung Hyun Park won the U.S. Women’s Open, In-Kyung Kim fired a bogey-free 8-under 63 at Highland Meadows Golf Club on Sunday to win the Marathon Classic by four shots.

Kim, who won the ShopRite LPGA Classic in June, joins her countrywoman So Yeon Ryu (ANA Inspiration, Walmart NW Arkansas Championship) as the only two-time winners on tour this season.

“I think today the pin positions were a little bit comfortable for me,” said Kim, who now has six LPGA Tour wins. “I’ve been hitting little draws this week, and when the pin is tucked on the left side, I was having a hard time, but I think just knowing what I’m doing kind of helped me to plan out the round.”

Four shots back, and alone in second, was Lexi Thompson, who shot a final round 5-under 66.

“17-under, I’m never going to complain with that. I did my best. That’s all I can do,” said Thompson, who finished runner-up for the fifth time this season.

Gerina Piller (68), who led after both of the first two rounds, finished tied for third along with Peiyun Chien at 15-under.

“I feel like my game, I played really well. To start off 8-under, that’s huge. But I didn’t come away with the win, but it doesn’t mean I didn’t have a winning performance,” said Piller, who is still searching for her first career win.

A logjam of five players finished in a tie for eighth at 12-under, including 54-hole leader Nelly Korda, who posted a 3-over 74 on Sunday.

“I don’t really expect to win out here because everyone is so good.” @SWEET_IKKIM is only the 2nd person to have multiple wins in 2017 pic.twitter.com/C7OSJDsSiE

“My really good friend, actually a fan from here, he comes to other tournaments, and he knows that I love Beatles and Paul McCartney, and he gave me this, and I put it on, and just like, dang, just good vibe, I think.”
–In-Kyung Kim, on her Beatles ball marker