Houston, we have a winner.

Stacy Lewis ended a three-year winless streak on Sunday at the Cambia Portland Classic, and with it created one of the great feel-good stories of the golf season.

Lewis will donate her $195,000 check to relief efforts in her hometown of Houston.

“I’m more relieved just knowing that I can pull the shots off when I need to,” said Lewis, who was a 12-time runner-up since her last title. “I knew I could win, but it’s always hard. There are great players on this tour.”

Lewis birdied four of the first seven holes and parred the final 11 to finish at 20-under 268. 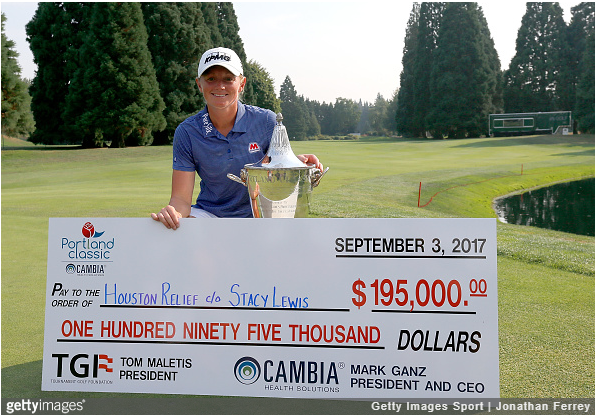 “Just kind of handed over control and said, ‘Take me. Take me to the finish line. Let me know what happens, God,'” Lewis said. “It was just amazing how when you let go of the control like that, how great you can play.”

Lewis’ husband, who is the head women’s golf coach at the University of Houston, surprised her on the 18th green after her win.

“I was fine until he showed up and then I started crying. But just have to him here and have him support me, you know, the last two and a half three years has been really hard. It’s been really frustrating at times. You go through all the emotions of finishing second when sometimes it’s your fault and sometimes it’s not, and things just don’t have seem to ever go your way and you get really frustrated at times,” admitted Lewis. “He went through all of that with me, and it was probably as hard on him as it was on me. So just to have him here and get to share the win with him was pretty special.” 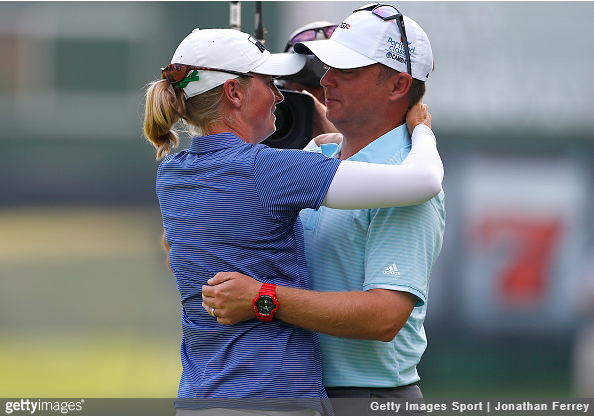 Brittany Altomare (69) and Moriya Jutanugarn (72) tied for third at 14 under.

Ai Miyazato posted a 67 to headline a group of four tied for fifth at 13 under. It was the Japanese star’s final start in the United States. The winner of the 2010 Portland Classic plans to retire after The Evian Championship in France. Also at

“I was hoping some of my sponsors would step up and donate a little bit. Obviously wasn’t expecting the match from KPMG. Marathon, they have an office and refinery and all that down in Houston, so they wanted to make that donation, but didn’t want to make it to the public. I think it’s something we should talk about because it’s a big deal. My sponsors have always been great from the get-go.”