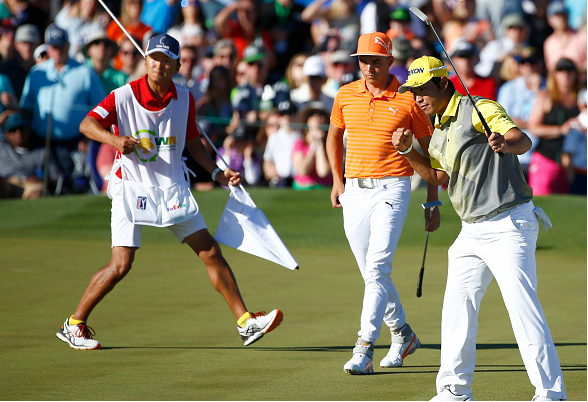 Before Justin Thomas became the hottest player in the world, that title belonged to Hideki Matsuyama. Over a stretch of five tournaments (mostly international) this past fall, Matsuyama won four of them, with his only non-win being a T2 to Justin Thomas at the CIMB Classic.

At the start of the 2017 calendar year, Matsuyama’s hot play continued with another runner-up to Thomas at the Tournament of Champions. The Japanese star was the only one in the 32-man field who was able to put any kind of pressure on Thomas after he went into the final round with a 7-stroke lead.

When Hideki Matsuyama took the Waste Management Phoenix crown last year in a thrilling 4-hole playoff, he looked ready to really break out and become the star he had played like in stretches. The rest of his 2016 season was mostly a quiet success. He did not win any more tournaments, but did have a number of high finishes, including a T4 at the PGA Championship, a T7 at The Masters, and a T7 at The Players. His putting gave him trouble sometimes, but he ranked 6th on Tour in strokes gained: tee-to-green.

Matsuyama has cooled off a bit in his last couple of starts (T27 at the Sony Open and T33 at the Farmers Insurance Open), but the defending champion enters Arizona with great confidence, and as the #5 golfer in the world.

In addition to his Phoenix Open victory last year, Matsuyama was T2 the year before and T4 in 2014. This is a course where he is obviously very comfortable, and it will be a surprise if he isn’t in the mix again this year.