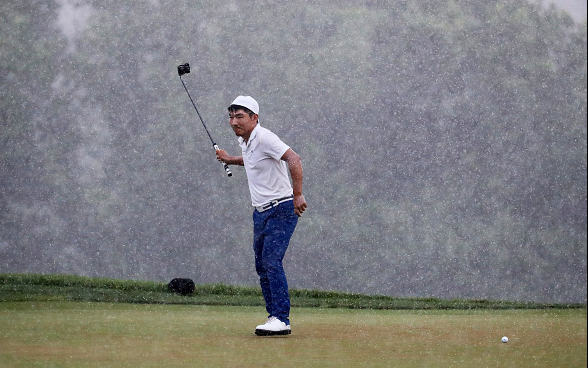 A very crowded leaderboard made for a crazy Sunday at the Quicken Loans National at TPC Potomac, as roughly a dozen players still had a chance coming in.

One of those players, South Korea’s Sung Kang, found himself at an enormous disadvantage when sunny skies briefly broke into a torrential downpour.

While champion Kyle Stanley, among others, were able to ride out the surprise storm, neither Kang nor his caddy had packed an umbrella, or any other rain gear.

During the downpour, Kang missed a short birdie putt on No. 16 that would have tied the lead. The horn then sounded, signifying a weather delay, one that only ended up being five minutes long.

Once play resumed, a drenched Kang was still out of sorts and double-bogeyed the 17th hole, ending his chances of a first career PGA Tour victory. At -4, Kang finished in a share of fifth place.

“It said zero percent chance of rain all day. Like no chance of thunderstorms at all.”
–Sung Kang