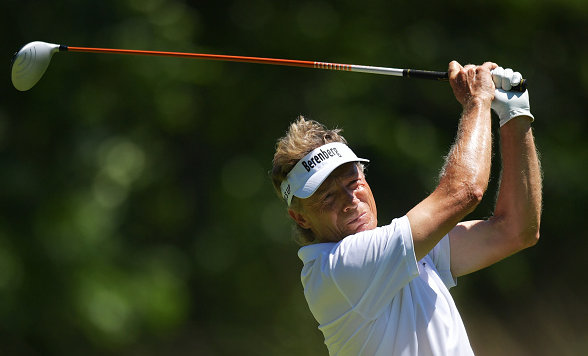 In today’s PGW Rundown, Sung Kang makes a rookie mistake that may have cost him a win; Tommy Fleetwood comes out on top in France while three others clinch spots at Royal Birkdale; and Bernhard Langer falls short in his attempt for a third-straight 2017 major victory.

A very crowded leaderboard made for a crazy Sunday at the Quicken Loans National at TPC Potomac, as roughly a dozen players still had a chance coming in.

One of those players, South Korea’s Sung Kang, found himself at an enormous disadvantage when sunny skies briefly broke into a torrential downpour.

While champion Kyle Stanley, among others, were able to ride out the surprise storm, neither Kang nor his caddy had packed an umbrella, or any other rain gear.

During the downpour, Kang missed a short birdie putt on No. 16 that would have tied the lead. The horn then sounded, signifying a weather delay, one that only ended up being five minutes long.

Once play resumed, a drenched Kang was still out of sorts and double-bogeyed the 17th hole, ending his chances of a first career PGA Tour victory. At -4, Kang finished in a share of fifth place.

“It said zero percent chance of rain all day. Like no chance of thunderstorms at all.”
–Sung Kang

Overshadowed by some of the bigger names in Europe, Tommy Fleetwood is threatening to become one of their most feared.

The 26-year-old Englishman, who made headlines in the U.S. when he contended at the U.S. Open, won the European Tour’s most recent event, the HNA Open de France over the weekend.

At -12 for the tournament, Fleetwood beat American Peter Uihlein by a single shot, notching his second victory of the season and propelling to the top of the European Tour’s Race to Dubai standings.

“Winning, it’s the best feeling by far in golf and to do it on this golf course in this event, a Rolex Series event, just massive, massive bonuses. It’s just been a great week from start to finish. Coming off the back of good golf, US Open and BMW in Germany, felt like I’ve been swinging it well. So it’s good to put it into practice and I’ve just kept up good form.”
– Tommy Fleetwood

Peter Uihlein was no doubt disappointed to fall a single stroke short at the HNA Open de France over the weekend, which would have been his first career European Tour victory since 2013, but he did not leave France empty handed.

As a runner-up finisher, the former U.S. Amateur champion received a spot in the field at this month’s Open Championship at Royal Birkdale.

Uihlein was among three who was added to the field, as the tournament awarded three spots to players inside the top 10 who were not already exempt.

Along with Uihlein, Sweden’s Alexander Bjork, who finished T3 after holding the 54-hole co-lead, and France’s Mike Lorenzo-Vera, who was also tied for third place in his home country, five strokes behind winner Tommy Fleetwood.

“It’s what you practice for and it’s what you play for is to get in contention on Sunday in the final group and see how it goes. I was proud of the way I handled myself on the back nine. I felt like I hit it a lot better after a shaky start. I’m excited for tomorrow.”
–Peter Uihlein, after capturing the 54-hole lead at the French Open.

Langer-Slam Snapped at Two Straight at the Senior U.S. Open

Bernhard Langer, the 59-year-old who has absolutely dominated the Champions Tour in recent years, was the big story coming into this week’s Senior U.S. Open.

Langer won the first two majors of the year, and was considered a favorite this week as well. He got off to a great start, playing himself into contention with a 67-65 on Thursday and Friday, but the weekend was a struggle, as over-par rounds of 72 and 74 dropped him to -2 for the tournament, good for a share of 18th place.

“It’s hard to win one in a row.”
–Bernhard Langer, after falling short in his quest for a third-straight 2017 major victory.