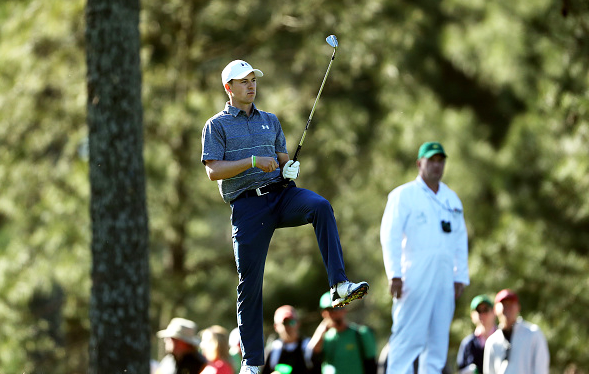 After 36 holes, the leaderboard at the Masters is star-studded and super tight, setting up for what should be an exciting weekend at Augusta National Golf Club.

Only 11 players are at even-par or better, and only 4 shots separate first place from 10th. At the top of the leaderboard is a foursome made up of round one leader Charley Hoffman, Sergio Garcia, Thomas Pieters, and Rickie Fowler. They are all at 4-under-par, and two shots clear of the field.

3 Storylines From Round Two

Freddie Couples, the winner of the Green Jacket way back in 1992 (one year before Jordan Spieth was born), is smooth as ever – shooting a 2-under 70 in round two. The 57-year-old is tied for seventh after 36 holes.

If watching Fred Couples play doesn't put a smile on your face, you need to reevaluate yourself as a person #Masters

If I only had 1 course and 1 golfer to watch for the rest of my life, it'd be Fred Couples at Augusta

There aren't many delights in sports quite like that of watching Fred Couples stroll casually around Augusta National. #Masters

Sergio Garcia was credited with a triple bogey-7 at the 10th hole, despite only making a bogey-5. It was eventually corrected.

There was a scoring-reporting error with Sergio Garcia. He made a bogey 5 on No. 10. The error is being corrected. #themasters

@TheMasters @TheSergioGarcia Figure out your score board problems. Don't the members of Augusta pay enough for accurate scoring?

If you aren't pulling for @TheSergioGarcia over the weekend, you're either a big Rickie fan or a typical American viewer. #Masters

A Tradition Unlike Any Other #TheMasters

After a bogeys on two of the first four holes, Jordan Spieth was at 4-over and not looking good. But over the final 14 holes, Spieth was bogey-free while dropping four birdies to get back to even-par.

Jordan Spieth shoots a 69 for his 2nd round and is four shots off the lead. He's still in this. #TheMasters

Jordan Spieth was tied for 67th place after posting a 9 on No. 15 Thursday. He's now heading into the weekend in the top 10. Great recovery.