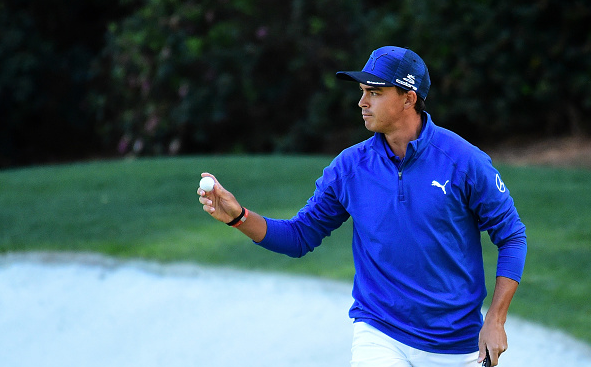 High winds were still ravaging hell on the 93 elite golfers who qualified for this year’s Masters, but in round two, scoring did improve, with six golfers posting scores in the 60s; triple the opening-round total.

Thursday was mostly a one-man show as Charley Hoffman obliterated the field, but Friday was a different story. Hoffman is still a leader, but not the only one.

Dropping three strokes with a disappointing 75, Hoffman is now -4, and is tied with Sergio Garcia, Thomas Pieters, and Rickie Fowler, who were all phenomenal in round two.

Jordan Speith Adam Scott, two former Green Jacket winners, made moves towards the front of the crowd today. The former champs both finished at 3-under 69, and jumped 31 spots on the leaderboard – from T41 to T10.

And it would not be The Masters if the ageless Fred Couples was not on the 36-hole leaderboard – which he is.

The 57-year-old carded six birdies on his way to a two-under 70, and now sits at -1 for the championship (T6), leaving him only three strokes behind the leaders.

Augusta looked easy for Charley Hoffman in round one, and only Charley Hoffman. His four-stroke lead turned into a four-way tie after Hoffman was unable to keep it going in round two, shooting ten strokes worse.

Hoffman started and finished well, but had all five of his bogeys in a six-hole stretch from 6-11.

Sergio Garcia famously is still looking for his first major at 37 years old, and might have his best chance at a green jacket after a second round 3-under 69, which included birdies on each of the first three holes.

Rickie Fowler, who like Sergio is also looking for his first major, kept his recent hot play going on Friday as his 5-under 67 was the low round of the day. Fowler also had just one bogey in his round.

Thomas Pieters was all over the place in round one, reaching -5 after 10 holes, but finishing at even-par for the day. The Masters first-timer did much better avoiding big numbers in round two, with just a single bogey on the day, which happened on the first hole. Three birdies and an eagle from there lead to a 4-under 68 for Pieters.

Getting Hot in Round 2

While Charley Hoffman was ten strokes worse today compared to round one, two-time major champion Martin Kaymer did the complete opposite, and rocketed up 59 spots on the leaderboard. His 4-under 68 was ten strokes better than his round one total. Kaymer was bogey-free, especially impressive when considering he had seven bogeys and a double in round one.

Jordan Spieth took back his normal spot as a Masters savant. After a second round 3-under 69, his first round 75 looks like even more of an anomaly. He is now at even-par for the tournament, only four strokes out of the lead.

Matching Spieth with a 75-69 start was Adam Scott. The 2013 Masters champion called the conditions “unplayable” on Thursday, but after dropping an incredible seven birdies today, Scott seems to have figured it out.

Going into this week, the last Masters champion to miss the cut in his defense was Mike Weir 13 years ago. That clock can now be set back to zero, as Danny Willett started his day with a quadruple-bogey on the first hole, and never recovered, finishing with a 6-over 78 and missing the cut by a single stroke.

Bubba Watson has two green jackets, but four straight bogeys to start his round ended any chance for a third green jacket this year. Watson finished the day at 6-over 78, and finished the tournament at +8, two strokes below the cut line.

Shane Lowry was even worse; with six bogeys on the front-nine, Lowry shot a 7-over 79 and missed the cut by a stroke.

“I’ve holed the winning putt about a million times. I’ve watched it my whole life, as do all of those guys have practiced that winning putt. Hopefully, one day.”
–Thomas Pieters, second round co-leader being asked is he has imagined being in contention at The Masters