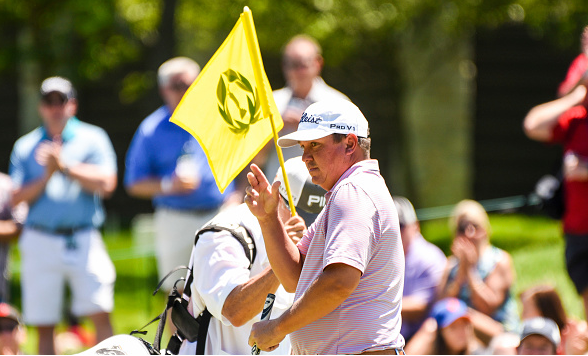 Jason Dufner posted a second-consecutive 7-under 65 on Friday at Muirfield Village Golf Club, and now leads The Memorial Tournament by five strokes heading into the final 36 holes.

Dufner’s record-setting day started somewhat slow. The former PGA champion was at 2-under through eight holes. But after a 176 yard hole-out for eagle on the 18th (his ninth hole of the day), Dufner made the turn at 4-under and then dropped three straight birdies on holes 5, 6, and 7 to finish at 65, giving him the 36-hole scoring record at ‘Jack’s Place.’

Afterwards, Dufner cited a combination of club choice and good luck for his hole-out eagle.

Daniel Summerhays, who started the day one back of Dufner at T3, bogeyed the final hole and finished at 3-under 69. He’s alone in second at 9-under.

Rickie Fowler was 3-over par after four holes in the opening-round. Since then, however, the recent winner of the Honda Classic has gone 11-under, including a 6-under 66 on Friday.

The 28-year-old Fowler, solo-third at 8-under, was “happy” with his performance, especially his ability to overcome his opening-round “mistakes.”

“I was able to get rid of some mistakes I made yesterday. I made a lot of really good swings, hit my numbers a lot, which out here you have to be pretty precise coming into the greens,” said Fowler. “Happy about that. Didn’t lose too much ground. Happy I was able to get a few coming in to make sure I wasn’t too far back for the weekend.”

After round one, Jordan Spieth was tied for second, just one back of Dufner at 6-under. Following an even-par round of 72, the two-time major champ dropped just two spots in the standings, but lost seven strokes off the lead, and is now eight shots back heading into the weekend.

Spieth, who is tied for fourth with Justin Thomas (71) and Jamie Lovemark (69), said it is going to be tough to make up that many strokes on a former major champion like Dufner. But the pressure will also be on the leader.

“Duf is obviously in full control of the ball tee to green, and you’ve got to be making some putts, too,” Spieth said. “He had two fantastic days. He’s a major champion and a multiple PGA Tour winner, he’s going to be a tough guy to chase down. But again, playing with the lead on this golf course I imagine is going to be difficult.”

Phil Mickelson posted a second-consecutive 2-under 70 and headlines a group of seven players at 4-under, T13.

Dustin Johnson, ranked No. 1 in the world, followed up his birdie-free opening-round 78 with a 2-over 74 and missed the cut by five shots. Afterwards, Johnson succinctly described his feelings.

Jason Day, the world’s third-ranked player, finished at 1-under 71 and stands at 2-over, 16 shots off the lead.

“Nice to grab a record for the time being. So I’m happy with the position I’m in in the weekend. I need another couple good rounds, but I feel good with my game. I think going forward just trying to see how the golf course is going to play the rest of the week, see what the weather does for us. There’s a big challenge on this golf course, I think it gets a little tougher, generally speaking, on the weekend. So I won’t be quite expecting to shoot 14-under on the weekend. But maybe the weather, the soft rain will make the course soft and more playable. So we’ll just kind of go from there and see how it goes.”
–Jason Dufner, 36-hole leader