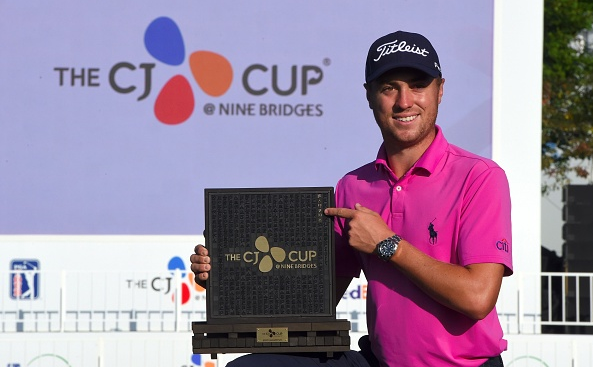 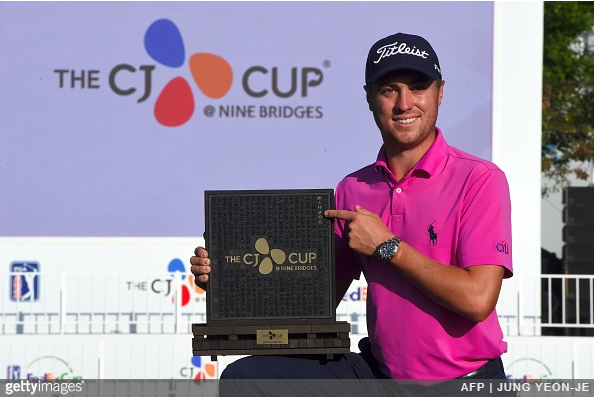 It was a brand new event, but not an unfamiliar result.

Reigning PGA Tour Player of the Year, and FedExCup Champion, Justin Thomas, again asserted himself as the current best golfer on the planet, triumphing over fatigue and capturing the title of the inaugural CJ Cup @ Nine Bridges on Jeju Island, South Korea – his first win of the new season, and his sixth title in his past 25 starts.

Despite being widely recognized as the best player in the field earlier in the week, the chances of the 24-year-old superstar Thomas were largely doubted coming off a surprisingly pedestrian performance at last week’s CIMB Classic in Malaysia, a tournament he entered as the two-time defending champion.

Even Thomas himself questioned how much he had left in the tank after his wildly successful 2016-17 season ended, and it was speculated that he was primarily focused on his scheduled extended time off.

It turns out that a 70% Justin Thomas, or however much fuel he had left, was still good enough to beat a field that included 10 of the top 30 players in the world.

A gritty final-round even-par 72, allowed Thomas to force a playoff with the suddenly-hot Aussie Marc Leishman – a playoff that Thomas won on the second extra hole. 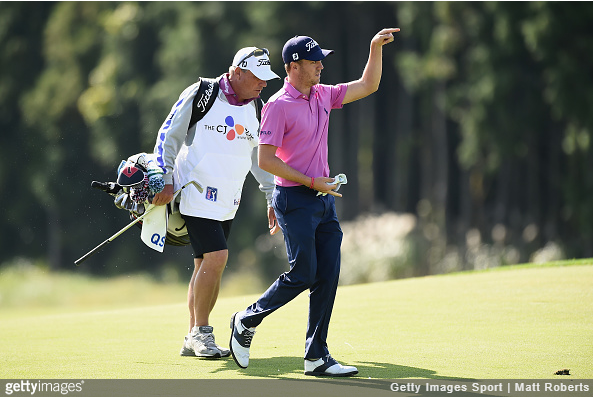 Thomas and Leishman finished at 9-under 279 for the week, a surprisingly high final score after the course yielded very low scores in the opening round. Increasing winds over the course of the tournament led to fewer red numbers on the weekend, and in the end, the cream rose to the top, as it often does.

Thomas and Leishman finished one stroke ahead of Cameron Smith, and three strokes ahead of low-Korean Whee Kim.

HOW THOMAS DID IT

Pegged as his last official tournament of the 2017 calendar year, Thomas seemed exceptionally motivated to put a so-so T17 performance last week behind him, scorching the Thursday field for a 9-under 63. 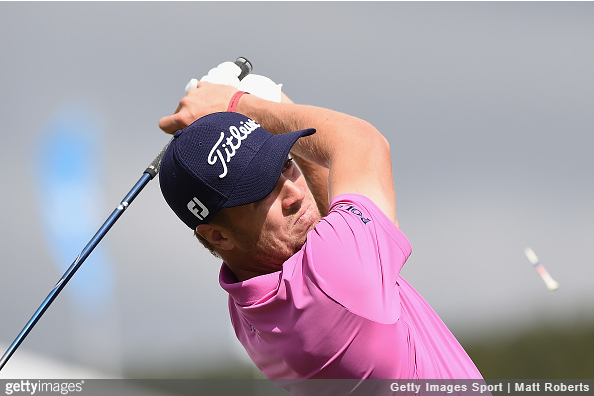 As conditions became considerably more difficult after round one, Thomas looked less invincible, posting 74-70 over Friday and Saturday, but that was still good enough to hold the 54-hole co-lead with Scott Brown.

Strong winds early on Sunday wreaked havoc on the leaders, and Thomas was no exception. He double-bogeyed the par-5 third hole and was still 2 over on his day through eight holes. But Thomas suddenly got hot with back-to-back-to-back birdies on 9, 10, and 11, and vaulted back to the top.

“It was tough out there today, for these last three days it was extremely difficult condition with the wind but, I’ve stayed really patient this weekend and patient today,” said Thomas.

Down the back nine, The CJ Cup essentially became a four-man tournament, with Thomas, Leishman, Smith, and Anirban Lahiri all in the mix.

Thomas went on to bogey 13 and 17, and when Leishman birdied the par-5 18th ahead of him (very nearly an eagle) to get to 9 under, he knew he had to make something happen on the 72nd hole. A laser of a second shot had Thomas safely on in two where he two-putted for birdie to force extra holes.

“I knew Leishman went in there close and I needed to hit a good tee shot there. And I hit it probably the best 3 wood I hit all week, just set it perfect down there a little in the neck,” said Thomas, who has converted on five of his last six 54-hole leads. “It was kind of between clubs a little bit but those are the moments you play for. That’s why I chose to play professional golf, that’s why I love to win.”

Going back to 18, Thomas and Leishman both parred the first playoff hole. On the second go-round at 18, Leishman’s aggressive second shot leaked right and landed in the water, making Thomas’ job something of a formality.

Yet, instead of laying up, Thomas drilled his approach to the front of the green, and eliminated all doubt. Thomas was able to two-putt for birdie and the win.

Thomas was not especially accurate during the week, finishing T39 in driving accuracy and T44 in greens in regulation, but he made the most of the opportunities he did have, and only two players in the 78-man field carded more birdies.

“It’s a great way to cap off the year. I’m really excited to do nothing for a while,” said Thomas, who has played in 10 of the last 11 PGA Tour scheduled events. 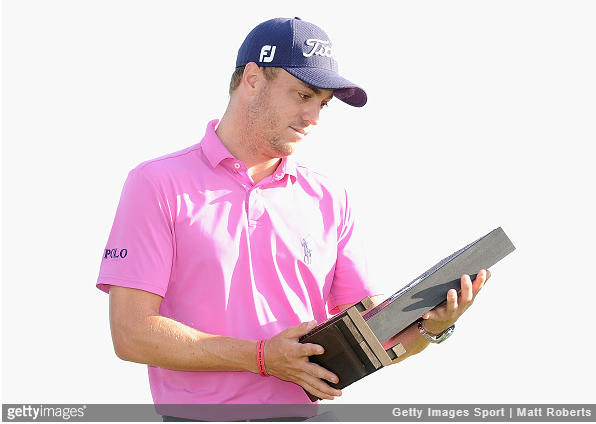 He has just one more tournament scheduled this calendar year – the unofficial Hero World Challenge, an 18-man December event in The Bahamas hosted by Tiger Woods.

Few players were able to find much success during the windy fourth round. The low score of the day came from last week’s winner in Malaysia, Pat Perez, who shot a 4-under 68 to rise 19 spots up the final leaderboard, into a tie for fifth. 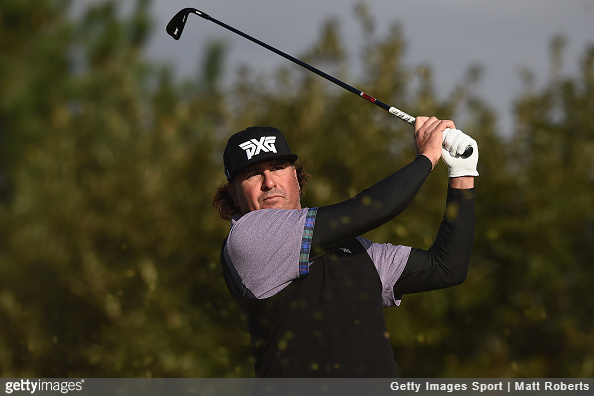 Perez went bogey-free on the final day, and even with five bogeys on Saturday, he finished second in bogeys for the week.

In his first outing since an incredible 3-0-1 performance at the Presidents Cup, Patrick Reed was in the mix for much of the day. Like Thomas, Reed accelerated mid-round with birdies on 9, 10, and 11. Three late bogeys, though, ended his championship hopes, but his 2-under 70 was one of the best rounds of the day.

Reed’s 70 was matched by Leishman and Cameron Smith, the latter of whom also finished very highly last week, posting a T5 in Malaysia.

Scott Brown reached 54-hole co-leader status by playing each of his first three rounds under par, but playing in the final group with Thomas and Lahiri did not end with the results he’d hoped. 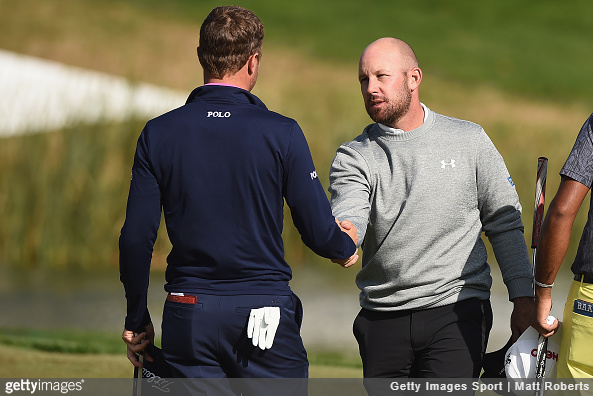 Brown followed a double-bogey on 4 with another double-bogey on 5. He played even-par golf over his other 16 holes, but that was not enough to make up for his early two-hole stumble as he finished with a 4-over 76.

At T5, Brown finished four strokes back of Thomas.

Despite phenomenal tee-to-green play over the past few seasons, Lucas Glover has not won since 2011 (Wells Fargo). The former U.S. Open champ had hopes that The CJ Cup could be the end of his drought, after opening the tournament with rounds of 69-67. A third-round 74 knocked him back a little bit, but he was still in the picture going into Sunday.

The biggest drop of the final day came from Robert Streb. After butchering his back nine with five bogeys over the final seven holes, a 7-over 79 saw him to plummet 20 spots to T40.

“I really didn’t… I didn’t travel all this way to make this a three shot hole. I figured it be easier if I just went for two. Thanks for the question.”
–Thomas, when asked why he didn’t lay up after Leishman went into the water on the second playoff hole.