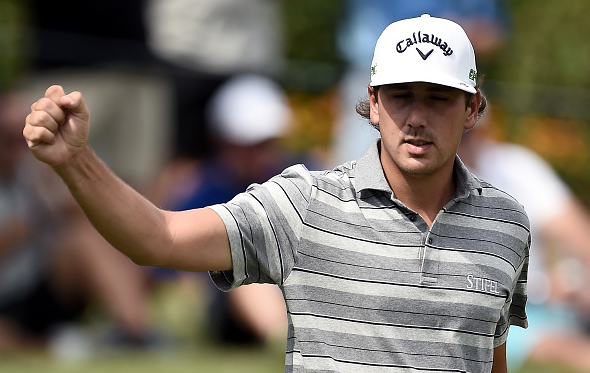 After the first day of the Dean & DeLuca Invitational, there is a three-way tie atop the leaderboard.

Derek Fathauer, J.T. Poston and Kelly Kraft all posted 5-under 65s, and co-lead after 18 holes at historic Colonial Country Club.

The top trio is one shot ahead of rookie phenom Jon Rahm, who bounced back nicely from a third round 82 at TPC Sawgrass with a 4-under 66. Graeme McDowell and Scott Brown also posted 66s and are tied with the young Spaniard in fourth place.

Two former winners at “Hogan’s Alley,” Phil Michelson and Zach Johnson, are two back, and tied for 8th at 3-under along with four other players.

Defending champion Jordan Spieth posted even-par in the opening-round and is five back.

Putts of the Day

Wesley Bryan drains a long bomb putt for birdie on No. 6.

Kelly Kraft drops a 40-footer for birdie to grab a share of the lead on 16.

“When I kind of got here this morning it was nice and calm out. The day turned into being pretty windy and kind of blustery out there. I was a happy to get started off well in the wind, and got it to a couple under through however many, five holes, and kind of set the tone for the rest of the round.”
–Kelly Kraft, Co-leader

“I just hit the ball really good. Felt like I kept it in front of me pretty good. Had a lot of control of where I was hitting it, which is really key with this kind of wind. Putted it nice, too. Every time I needed to make kind of a good par putt to keep the round going I did, so it was just a good day.”
–J.T. Poston, Co-leader

“I just played solid golf. Didn’t do anything spectacular. Didn’t hit any shots close. Just made a few putts and kind of stayed out of trouble.”
–Derek Fathauer, Co-leader