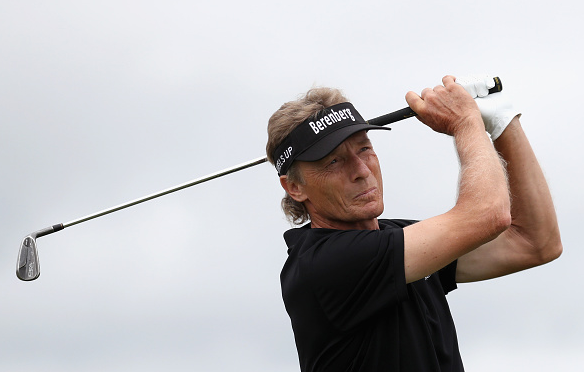 Bernhard Langer posted a 7-under 65 in the opening round of the Senior PGA Championship and leads by two shots after 18 holes at Trump National.

Two shots back of Langer is a group of five players, at 67, which includes Lee Janzen, Tom Lehman, Scott McCarron, James Kingston, and Larry Mize.

Due to the rainy conditions, players were allowed to lift, clean and place their golf ball in the fairways. The PGA of America also moved up some tees, which shortened Trump National to a little under 7,000 yards.

“They shortened the course quite a bit and it turned out to be such a nice day, the course played incredibly short,” said Lehman, one of the five players at 5-under.

A win by Langer would make him the greatest senior golfer in Tour history. The 59-year-old German would break Jack Nicklaus’ record of eight senior majors. He would also become the first player to win all five of the current senior majors.

“I hit a lot of good putts. There was one or two other ones that actually I thought I made them and they just went over the edge, or one actually lipped out, but I also had two or three that went in that don’t go in every day.”
-Bernhard Langer, Leader