Tiger Woods entered the final round of the Valspar Championship at 8-under par and just one off the lead. 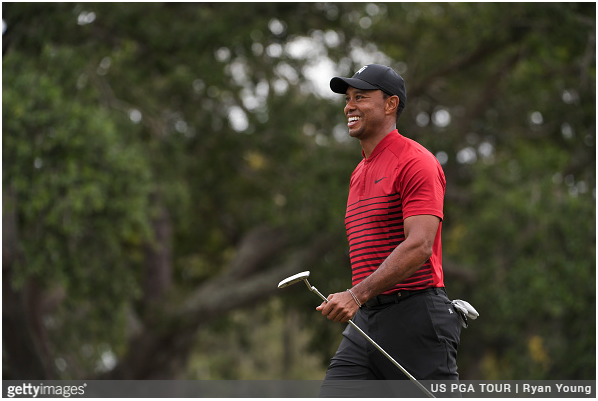 Things looked promising for Woods after a birdie on the par-5 first hole, but he followed it up with a bogey three holes later, and from there it was 12 straight pars to remain at 8-under par.

With Paul Casey already in the clubhouse at 10-under par, Woods arrived at the par-3 17th needing to finish the final two holes of the Snake Pit birdie-birdie. A tall order, no doubt, but Woods made it exciting nonetheless by nailing a 44-foot putt for birdie that rocked the grounds at Innisbrook… and set Twitter on fire.

Are you kidding me @TigerWoods ?!?

For the first time in years I’ve actively turned on golf to watch a non-major. Tell me Tiger Woods doesn’t matter to that sport ??‍♂️⛳️

I'll say this again: The same Tiger Woods who hasn't won a major championship in going on 10 years is still times 10 the biggest draw in golf and rivals LeBron for the biggest individual draw in sports.

Second place, one shot back.
Final round 70 without his A game.#Tiger Woods is back.

Hey @TigerWoods, that was fun man… Thanks for your service to my happiness on this beautiful Sunday. pic.twitter.com/Cl0oLvbAFC

@TigerWoods you are ridiculous ??? that putt on 17 wow!

Sunday at Bay Hill will be 1,687 days since Tiger Woods' last victory. pic.twitter.com/Mo4CZ4C1fV

No other athlete forces folks to their tv's like Tiger Woods. He's compelling and the most exciting athlete to watch…and everyone has a rooting interest in it. Tigers effect on golf can't be talked about enough

Tiger Woods is back baby ? pic.twitter.com/sxFgWtiVpL

Forget about this approach. That Tiger Woods is standing in the 72nd fairway, with a chance to make a playoff at an official PGA Tour event, is nothing short of astonishing

.@TigerWoods from deep! What a putt. So great to see him competing like this on a Sunday.

Well guys. I can confirm this. Tiger Woods, the golfer, is back. Very, very back.

Tiger Woods, Donald Trump and violent video games are in the news. It's the 90's again

My timeline is ??? for Tiger Woods in the Valspar Open in early March is something I never thought I'd be tweeting this year.

Say what you want about Tiger Woods but how many people are watching golf right now that haven’t turned it on in years?

Listening to the crowd, it really is amazing what Tiger Woods means to golf and the game's followers. I'm hanging on every shot and I've never played a round in my life.

Has anyone ever impacted a sport more than Tiger Woods has impacted golf? The anticipation for The Masters now is unreal!