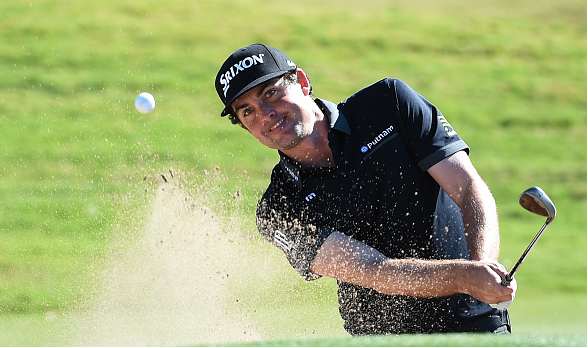 The weekend is here and Rod Pampling continues to be the surprise leader at the Shriners in Las Vegas. The Aussie is a stroke up on Brooks Koepka heading into moving day at TPC Summerlin.

Overall there are 11 players within 5 shots of the lead – which should make for a great golf weekend.

Speaking of great: Here’s a roundup of some of the greatest shots from round two by the photographers at Getty Images.

Keegan Bradley plays a shot from a bunker on the 9th hole.

Kevin Na from a bunker on the 12th hole.

Billy Horschel plays a shot from a bunker on the 15th hole during the second round.

Brooks Koepka plays a shot on the 17th hole during the second round of the Shriners.

Kevin Na putts on the fifth green during the second round at TPC Summerlin.

Ryan Moore of the United States putts on the tenth green during the second round.

Davis Love III surveys his putt during the second round of the Shriners.