Shanshan Feng fired a bogey-free 9-under-par 63 on Saturday and takes a two shot lead into the final round of the TOTO Japan Classic.

The defending champion made seven birdies and an eagle en route to a two-round total of 15-under 129. 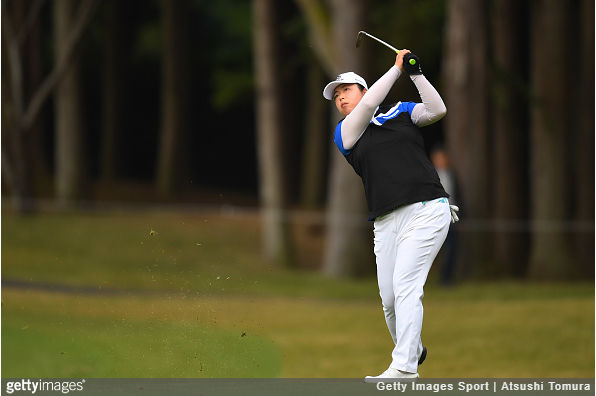 “What was working well was my putting today. The first three holes those birdies weren’t very short, and on the third hole after I hit the ball, when the ball was like halfway I stopped and looked at Mercer [caddie] and I was like ‘oh my god that thing is going in’ and then it went in,” said Feng, who is seeking win No. 2 on the season. “I was shocked, because that wasn’t a very usual start for a round, but then after that I kind of kept my good putting going on and finished with a 9-under.”

Japan’s Ai Suzuki is two back after posting a bogey-free 7-under 65, highlighted by an eagle on the par-5 17th to reach 13 under. The hometown favorite, who will be paired with Feng in Sunday’s last group, is targeting a final-round 67.

“Just play like first two rounds. I just want to play like now until the final tournament which is Ricoh. When I saw the score board on No. 6, Shanshan was very strong, but somehow that made me very calm,” said Suzuki. “I just have to play my game. If I can make 5 under tomorrow, I will be happy.”

England’s Charley Hull finished with a bogey-free 8-under 64 to get to 10 under. She is tied for third with South Korea’s Min-Young Lee (68).

“Pretty much all round I played pretty good, but I still left some shots out there, but I’m happy with my round,” said Hull, ranked No. 26 in the world.

A pair of Americans, Stacy Lewis (67) and Lizette Salas (69), along with Sweden’s Anna Nordqvist (68), headline a group of five players deadlocked at 9 under.

“I think I hit 18 greens today so obviously the ball striking is there, I just need to get the putter going,” said Lewis, who is No. 8 in the CME Globe standings. “Who knows, as Shanshan has shown you can make a lot of birdies out there. Who knows what happens tomorrow, the weather’s going to be a little cooler and hopefully it plays a little bit harder and I can play better.”

New Zealand’s Lydia Ko, who posted a second consecutive 68, leads a group of five more players at 8 under.

“It’s nice to be able to play some good golf, and hopefully I’ll be able to finish strong with another solid round tomorrow,” said Ko, currently No. 11 in the CME standings.

Lexi Thompson went level par on day two, and dropped to T42 at 4 under. Michelle Wie followed up a first-round 76 with an impressive 7-under 65 to get to 3 under and T48, alongside another American star, Jessica Korda (69).

“It’s not my first time leading a tournament, but of course it’s my first time maybe I’m not too far away from a title defense. Of course, before I came I was like if I can do it it would be great, but the most important thing I think is to enjoy the whole process and then playing with Ai (Suzuki) tomorrow will be fun.”
–Shanshan Feng (-15), on the chance to defend her title.