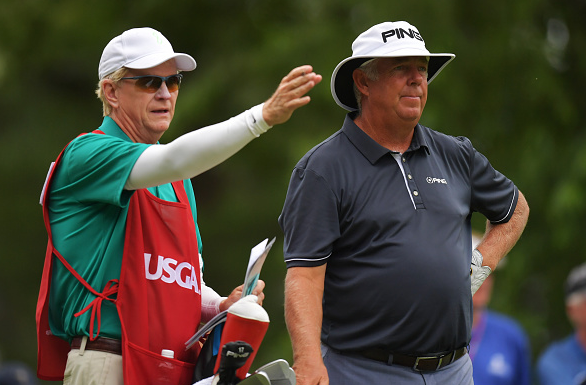 PEABODY, MA – Kirk Triplett fired an 8-under-par 62 in the opening round of the U.S. Senior Open at Salem Country Club and leads Olin Browne (63) by a stroke after day one.

Triplett, who started on the back-nine at the 6,815-yard Donald Ross design, made the turn at 4-under, and then went birdie-par-birdie-eagle on holes 1-4 to get to 8-under. The 55-year-old parred the final five holes to finish with the day’s low round.

“Today I just got some momentum. At one point during the round, I said, ‘OK, this is your day. Grab it. Go.,'” said Triplett in a post-round press conference. “I’ve always been a player that could shoot low rounds. I don’t shoot a lot of them, but when I do kind of get it going, I’m not afraid to kind of keep going, and it helps when they come in bunches.”

Browne, who posted nine birdies against two bogeys, is at 7-under, and alone in second.

“Managed my game well today. The result was I flinched a couple times at the right moment, and if the pin was tucked, my ball somehow ended up over there, said Browne, whose nine birdies were the most in a U.S. Senior Open since Kenny Perry in 2013. “So I made some nice birdies today. It was just a fun day to play.”

In third, two shots back at 6-under 64, is Doug Garwood. A group of six players are tied for fourth at 5-under 65, including Paul Goydos, Tom Lehman, Kenny Perry, Jerry Smith, Barry Lane and Duffy Waldorf.

Scott Verplank, Joe Durant, and Corey Pavin round out the top 10 at 4-under 66.

Bernhard Langer, the winner of the first two major championships on the Champions Tour, finished at 3-under 67 and is currently T13. Fred Couples posted a 2-under-par, his 18th consecutive under-par round this year. Defending champion Gene Sauers shot 3-over 73.

The 62 by Triplett matches the U.S. Senior Open record set by Loren Roberts in 2006 at Prairie Dunes in Kansas.

What you need to know about Kirk Triplett's 8-under 62:

The lowest #USSeniorOpen first-round score
Matches the lowest score in any round pic.twitter.com/jgkV5KqYBX

Opening with a 62 is a confidence booster, but Kirk Triplett knows he still has three rounds to play. #USSeniorOpen pic.twitter.com/TX0nGBsvtA

“It’s pretty special when, typically, par is an outstanding round in a USGA championship. I had the good fortune to play in, I don’t know, 15, 16, 17 regular U.S. Opens, so I know what it’s all about. And then coming out here, I’ve played in a handful of Senior Opens now. I certainly have never shot anything like this.”
–Kirk Triplett, Round One Leader

U.S. Senior Open To Require Masks Outdoors in July, Except to Eat or Drink