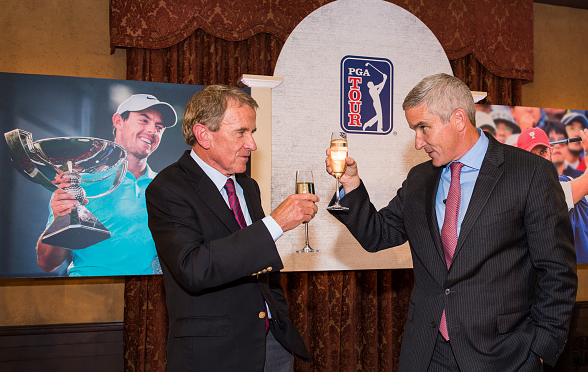 While most good golfers dream of playing on the PGA Tour, the 46-year old Monahan, through a series of strategic career moves, is now the No. 1 man, the Commissioner, of the multi-billion dollar enterprise.

For the past four years, Jay Monahan has served as the unremarkable, anonymous figure at PGA Tour functions – essentially the “apprentice” of PGA Tour Commissioner Tim Finchem.

Monahan, 46, a graduate of Belmont High School where he starred in both hockey and golf, assumes the high-profile role of commissioner of the PGA Tour which is facing challenging times.

Tim Finchem, although not an engaging, charismatic personality, has legendary accomplishments. When Finchem’s tenure began in 1994, PGA Tour purses were at $56.4 million; the Presidents Cup was making its debut; there were no World Golf Championships, no FedEx Cup playoffs, no Golf Channel, no International Golf Federation and no Olympic golf.

Finchem left with purses for 2017 totaling $338.8 million and all those other components are done deals. How does anyone come close to matching Finchem’s stellar success?

We reached out to the PGA Tour for an interview with the new commissioner, a man I’ve known for 18 years, but were denied access. Laura Neal, PGA Tour’s Communications Director, offered vague reasons for denying my request.

This indicates a continuation of Finchem’s communication approach which was cryptic and evasive. If Finchem’s reign as commissioner was noted for being profitable, it will also be remembered for its limited access and corny soundbites on important issues and topics.

Most of the material for this story was gleamed from press releases and selected media that Mr. Monahan chose to talk to.

We would have asked Mr. Monahan to be unscripted and answer questions such as:

These questions and many more will go unanswered for now and you can bet the mainstream media, or what’s left of it, will never ask or write any compelling investigative pieces in the near future.

“Jay is absolutely the right guy to deal with all that,” said Finchem, 69, a lawyer whose background before golf included politics. “I have the highest regard for Jay and have total confidence in his ability to lead the PGA Tour well into the future. He has been a key member of the executive committee team since joining the Tour and has worked closely with me on all business matters since becoming deputy commissioner. Also, Jay is well respected throughout the golf industry. I know he will do a tremendous job for the players and all constituents of the PGA Tour.”

From Fenway Sports Group, he went to the PGA Tour in June 2008, first as executive director of The Players Championship. In 2010, he was named the Tour’s senior vice president for business development and in March, 2013, was promoted to executive vice president and chief marketing officer and apprentice to the commissioner.

“I am greatly honored by the trust the Policy Board has shown in me to succeed Tim Finchem as commissioner,” Monahan said in a statement from his office. “Under Tim’s leadership, the PGA Tour has made remarkable progress, even in the most difficult economic times. We are now entering a very important time in our organization’s history, and I know our executive team and I will draw upon and be inspired by the invaluable experience of working with Tim as we take advantage of the extraordinary opportunities, as well as face the challenges, that are ahead for our Tour.”

The Monahan resume has deep Bay State roots but lacks any job description showing he is competent to run a $2 billion company with global prospects. The Wall Street Journal recently reported that golf’s expansion to China is stalling and the PGA Tour is unable to get any Chinese tournaments approved for the upcoming season. Liu Dongfeng, a professor at Shanghai is quoted as saying, “In terms of priority, golf is absolutely not on the agenda. The prospects for golf aren’t very bright, unfortunately.”

Monahan grew up in Belmont in a large close-knit Irish Catholic family, the oldest of three brothers, and the descendant of three previous generations of prominent Boston attorneys. Monahan attended Trinity College in Hartford, where he played hockey and golf and he was a Division III Academic All-American. He holds a UMass Amherst master’s degree in sports management. He has won, with his dad Joe, Winchester Country Club’s Father and Son Championship, four times and maintains a 3.9 handicap index at TPC Sawgrass, in Ponte Vedra (Fla.) where he lives with his wife, Susan, and daughters, Sophie, 13, and Phoebe, 10.

“You meet Jay, and it’s as if you’ve known the guy forever,” said 26-year veteran PGA and Champions Tour player Brad Faxon, from Barrington, Rhode Island, a longtime friend who has joined Monahan on family vacations. “Every single progression in his life has been a stepping stone where the next one was better than the last. Ask anyone about Jay Monahan, and a smile instantly comes to that person’s face. He’s one of the greatest salesmen I’ve ever met. He can make anybody say yes.”

Clearly, the powers-that-be in the golf world, like Seth Waugh, former Deutsche Bank CEO, admire Jay Monahan and approved the promotion. Waugh gushed, “Good bones and good character. He cares, he’s passionate and you can’t teach those things. He works hard, is very earnest, but he’s fun too.”

Paul Spengler, vice president of Pebble Beach Company, and Mark Steinberg, Tiger Woods agent, are in near unanimous support that Jay Monahan is the best man for the job of leading the PGA Tour in the right direction in the next few years.

Six months into the job and the big obstacles for Monahan are sagging TV ratings, what TV contracts will be extended, a full explanation of the FedEx Cup contract, will there be FedEx Cup schedule changes including possibility that Dell Technology Championship at TPC Norton and will it be vanished in 2018, retaining existing corporate sponsors after Barclays, Cadillac, Deutsche Bank and Chrysler bolted PGA Tour partnerships, and the threat of decreased tournament purses. The added burden is that the sport is losing its allure and millennials have little interest in playing or watching golf.

It’s hard to find anyone to say a negative word about Jay Monahan, this early into his role as the one of the most influential figures in the game. The kudos say that he is upbeat, energetic and a relationship builder.

Of note, Monahan co-founded a charity, with friend and former colleague Brain Oates, a sales director for the New England Patriots. In 2003, Monahan and Oates formed a 501(c) (3) called Golf Fights Cancer claiming to be crushed when IMG colleague Rob Stevens died and left a wife and three children. They both raised money running the Boston Marathon and through other golf events, the charity thrives today and has donated nearly $5 million to fight cancer.

“Jay’s a Type A person people like to be around,” said Oates. “It’s why he’s got a million friends. It’s doesn’t matter if you’re a CEO or a caddy. He listens. You’ve never heard of anyone who knows Jay who doesn’t like him. The Tour is in great stead with him.”