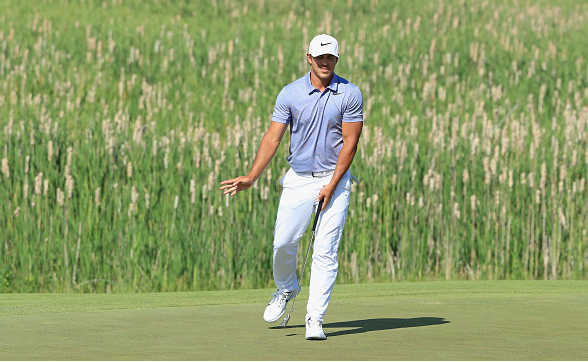 The fast, spiraling wind that is so characteristic of the part of the Midwest that hosts Erin Hills has been conspicuously quiet during the first two days of the U.S. Open.

As a result, scoring has been low through two rounds; very low for a U.S. Open. Through 36 holes at last year’s U.S. Open at Oakmont, there were just ten players under par. This year, that number has raised precipitously to 42 players.

The low score after two rounds is seven-under, which is incredibly low considering that only two players this century have finished a U.S. Open double-digits under par (Tiger Woods in 2000, Rory McIlroy in 2011). We are seeing a volume of red numbers that are unheard of at the U.S. Open.

That being said, just because the scores are low, doesn’t mean the course has been playing easy. While an exceptionally high number of players are under par, the best of the best have been absolutely bewildered by Erin Hills.

Only two players who have won a major before are inside the top 20 on the leaderboard: Sergio Garcia and Martin Kaymer, who are both tied for 19th.

Chances are that the tournament will get more difficult as the weekend progresses, which is fairly typical at majors, but those who took most advantage of the benign conditions over the first two days obviously have a better shot at holding a trophy on Sunday.

Through two rounds, four players are tied for the lead at 7-under: Paul Casey, Brian Harman, Tommy Fleetwood, and Brooks Koepka, a quartet with just three career PGA Tour wins among them.

They lead by one stroke over Jamie Lovemark, Rickie Fowler, and the suddenly resurgent J.B. Holmes.

How The Leaders Did It

The four players who are currently tied for the lead comprise of one player who went off in the morning (Casey), and three who played in the afternoon wave (Harman, Fleetwood, and Koepka).

Casey followed his career major-low opening-round 66 with an absolutely resilient 1-under 71 in round two. Casey fell off the pace early, dropping four shots in a two-hole stretch (triple bogey, bogey) on holes 14 and 15, which were his fifth and sixth holes of the day.

At 4-over through 8 holes, Casey ripped off five straight birdies to save his round, and get to 1-under-par for the day.

Harman, the short-hitter of the lead quartet, missed just one fairway in his second round. His bogey on the 5th was his only bogey through 36 holes. He shot a 2-under 70.

Fleetwood matched Harman’s 70, carding four birdies to two bogeys. Koepka surged into the lead with four birdies in his first seven holes, but after two dropped shots on the back nine, Koepka too, shot a 2-under 70.

The Best of Day Two

Hideki Matsuyama got his 2017 season off to a torrid start with two wins and two runner-ups in his first six tournaments, but has been very quiet since. He was anything but quiet in round two, following up a disappointing 74 in round one, with a bogey-free 7-under 65 in round two.

Matsuyama just narrowly missed a putt on the par-5 18th that would have tied the all-time U.S. Open record for strokes under-par in a round.

The 25-year-old superstar from Japan was not the only one to shoot a 65, however.

Lesser-known Chez Reavie birdied five of his first seven holes to match Matsuyama. Between those two 65s, and the one Rickie Fowler shot in round one, it is the first time in U.S. Open history that three players have shot 65 in the same tournament.

While not quite a 65, Bill Haas shot a near-flawless 4-under 68 in the morning wave that allowed him to vault 32 spots up the leaderboard.

Haas hit safely on all 14 fairways at Erin Hills, and leads the field with 27 of 28 fairways through two rounds. He current sits in a tie for 13th place, three strokes off the lead.

Dustin Johnson’s very busy week, which started with his fiancée giving birth to his second son on Monday, has ended before the weekend.

The defending champion birdied his first two holes and looked like he was ready to bounce back in a big way from his first round 75, but would only add one more birdie to his card, while also adding four bogeys.

DJ finished with a 73 and missed the cut by three strokes.

Jon Rahm has been having an incredible season for anyone, let alone a 22-year-old in his first year on Tour, but the popular pick to win missed his first cut of the season (in 15 events) after a second-round 73. He was 5-over through 36 holes.

Finishing even further back was world No 3 Jason Day, who was not at the top of his game for most of the season, but had been showing signs of coming back around as of late.

If Day wants to get back to No. 1, which is where he started 2017, he will need to do much better than the 10-over he had through two rounds at Erin Hills. Day followed up his opening-round 79 with a marginally better 75 in round two.

One of the more emotional aspects of this U.S. Open has been the realization that this could very well be the last for Ernie Els, a two-time winner who is playing on the last year of a five-year exemption for winning the 2012 Open Championship.

The 47-year-old old is in the midst of a nightmare season, but has found his game again at the major that has been best to him.

Els shot an even-par 70 in round two, which puts him at -2 for the tournament, good for a share of 24th place. Els has been especially great on the greens, as he leads the field in strokes gained: putting. If he keeps his current pace, he may qualify for at least one more year yet.

The top 9 shots from round two at Erin Hills.

Counting down 9 of the best shots from the second round of the #USOpen. pic.twitter.com/Of7YYwjfVf

“Yeah, I’d say so. I mean, it doesn’t really get me too worked up. Whatever happens, bogey, double, birdie, eagle, I’m pretty chill anyway. I’m enjoying it right now.”
–Brooks Koepka, on his low key attitude.