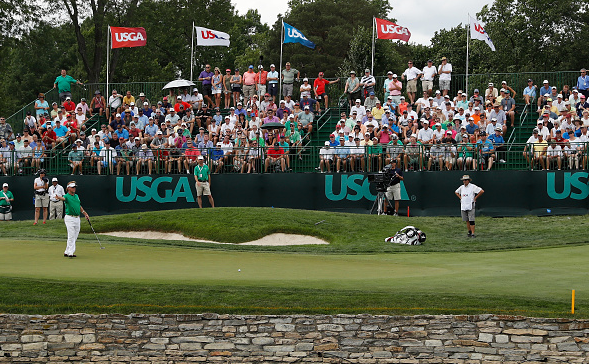 The well-earned reputation of the USGA as a sadistically evil major championship enterprise took a hit two weeks ago, when Erin Hills Golf Course played surprisingly easy for much of the PGA Tour at their 2017 U.S. Open.

The USGA loves their tournaments being the most brutal test in golf, and for four days, they uncharacteristically looked something resembling compassionate to the players they generally take so much pride in mercilessly torturing. Chances are, they did not like that, and future championship participants are likely to pay for the sins of that U.S. Open crew. Sadly, their next victims could be the 50-plus crowd.

The first attempt for the USGA to fully restore their reputation as diabolical golf geniuses will come this week, when a field of 156 senior circuit players take on Salem Country Club in Peabody, Massachusetts, perhaps an extremely appropriate location from the USGA’s point of view, for the 2017 U.S. Senior Open.

That field is highlighted by 59-year-old Super-Senior Bernhard Langer, who has won a record nine Champions Tour majors, including the first two of 2017. While Langer will justifiably draw the most attention, he is far from the only senior golfer that has the USGA trembling in fear. Fred Couples is in near impeccable recent form, and there is also Vijay Singh, Kenny Perry, Miguel Angel Jimenez, Colin Montgomerie, and David Toms, among others. Neither the field nor the USGA is likely to come out of the weekend unscathed.

The PGA Tour’s U.S. Open is one of its longest-running events, first teeing off in 1895. The Senior version of the USGA’s marquee event, however, did not exist until the U.S. Open had been being played for 85 years. That inaugural 1980 version of the Senior U.S. Open had a cut-off of 55 years old, and was won by Argentine legend Roberto De Vicenzo at Winged Foot Golf Club.

The very next year, the tournament age limit was lowered to 50, the cutoff age for Champions Tour membership, where it has been every year since. That 1981 tournament was especially difficult, with Arnold Palmer winning in spite finishing at +9.

It got progressively easier (although it is still the toughest test in senior golf) over the years, and added winners such as Billy Casper, Gary Player, Lee Trevino, Jack Nicklaus, Hale Irwin, and Bernhard Langer. Miller Barber, a 24-time Champions Tour winner, holds the tournament record with three victories, while Player, Nicklaus, Irwin, and Allen Doyle added two apiece.

Speaking of 1895, that is also when Salem Country Club, this year’s tournament host, was established. It was originally located in Salem, Massachusetts, but since 1925 it has been in nearby Peabody.

Salem is a classic Donald Ross design, and will be hosting its second U.S. Senior Open. It previously hosted the USGA’s senior major in 2001, in addition to the 1977 Senior Amateur, and a number of premier women’s events.

The defending champion of the U.S. Senior Open is Gene Sauers. An inspirational winner, Sauers missed seven years of his career with Stevens-Johnson Syndrome.

At Scioto Country Club, just outside of Columbus, OH the 53-year-old Sauers was one stroke behind Miguel Angel Jimenez to begin the final round, but a 1-under 69 on a brutal course setup got him to -3 for the tournament, and his first Champions Tour win. Sauers defeated Jimenez and Billy Mayfair by one stroke.

The results of the first two Champions Tour majors were as follows:

While those results are impressive, especially considering that Langer is 59 years old, they’re also very unsurprising, as Langer has been well engaged in a decade of Champions Tour dominance.

Among Langer’s Champions Tour accomplishments are:

In relation to his peers, Langer on the Senior Tour has been like prime Pedro Martinez: nearly untouchable. Langer is coming off a 2016 season where he had four wins, four runner-ups, and 18 top 10s in 21 events. His $3.0 million in earnings was over double what the man in second (Colin Montgomerie) earned.

So far, 2017 has been more of the same, with three victories in ten events, including the two majors, eight top 10s, and his $1.77 million in earnings is nearly double what second place Scott McCarron ($940,351) has.

Langer was the subject of small controversy earlier in the year, when he won the Regions Tradition, as he had been declared the all-time leader in Champions Tour majors, but Gary Player believed that he and Langer were co-leaders.

Player is credited with six majors, but twice won tournaments that were not considered majors at the time, but are now. Langer put that debate to rest when he went out the very next week and won the Senior PGA Championship, his ninth career major.

Langer does not appear to actually be aging, as he is No. 1 on Tour in scoring average (68.06) and #1 in greens in regulation, among a plethora of other strong statistical rankings.

Now, he comes into Salem Country Club with the Langer-slam still intact. While the field is undeniably strong, Langer is still the favorite, and it would be a large upset if he did not at least factor into the championship.

Only one player this year appears to be in Bernhard Langer’s league, that being 57-year-old Fred Couples. In seven events, Couples has two victories, and six finishes inside the top six. He has yet to finish a single round not under par, as a one-under 71 final round at the Insperity Invitational is somehow his worst round of the season.

Couples is currently 3rd on the Charles Schwab money list, trailing Scott McCarron by just $9,000 despite playing in five fewer events. He even added a T18 at The Masters where he, as he seems to nearly every year, was in contention through 36 holes.

The problem with Couples, however, is the same problem it always seems to be with him: injuries. His notoriously bad back has limited him to just the seven starts in 2017, after a season where he only played three events. He has only played multiple Senior events in one month, starting two in February and finishing T6 and 1st, respectively.

Couples’ impressive comeback victory at last week’s American Family Insurance Championship could be seen as both a positive thing and a question mark in regards to his U.S. Senior Open chances.

His game is obviously in a very good place; he was especially strong in last week’s final round, with birdies on six of his first 11 Sunday holes, but at the same time, he will be attempting to play back-to-back tournaments for the first time in over four months. The entire tournament could be hinging on whether his back holds up.

Vijay Singh, the 54-year-old Hall of Famer from Fiji, plays sparingly on the Champions Tour, choosing to still spend most of his time on the PGA Tour, where he has a lifetime membership, but when he does play the senior circuit, he plays very well.

In just three Champions Tour events this season, Singh has a victory and a runner-up finish, the latter coming at the Senior PGA Championship. Despite just the three starts, he ranks 8th on the Champions Tour money list.

His PGA Tour season, on the other hand, is not going so well. In 15 starts on the big tour this season, Singh has made just four cuts, with a T16 at THE PLAYERS his only top 30. If he keeps trending in that direction on the PGA Tour, he is very likely to be playing much more Champions Tour golf in the near future.

A Champions Tour grandmaster, Irwin has 45 victories on the Senior Circuit, the most of anyone by far (Bernhard Langer is second with 32). Those wins, which include seven major championships, all occurred between 1995 and 2007.

Despite being 72-years-old, Irwin still competes semi-regularly, as this will be his 7th start of the season. Age has sapped most of his power, as he is averaging just 251.4 yards per drive (still phenomenal for a man in his 70s, but far shorter than he used to), but he is still accurate, hitting an incredible 84.4% of his fairways this season.

Of the 36 PGA Tour majors collectively won by this 156-man field, Tom Watson has eight of them, the most of anyone teeing it up this week. Now 67-years-old, the near-2009 Open Championship winner has not played more than 8 events in a season since 2011, but still makes it to this tournament every year.

Watson has not won a U.S. Senior Open, but has finished runner-up three times, most recently in 2006.

At 50-years-old, the former PGA Championship winner is one of the youngest in the field, and will be playing this tournament for the first time. He has just three top 10s in the 11 events he has entered in his maiden Champions Tour season, but one of those, a T7, came at last month’s Senior PGA Championship.

Toms ranks 5th on the Champions Tour in birdie average, in addition to 7th in driving accuracy.

McCarron is second on the Champions Tour money list, although that amount is still just 53% of Langer’s season total. McCarron was runner-up to Langer at the Regions Tradition, the first major of the year, and followed that up with a T5 at the Senior PGA Championship.

In two years worth of Champions Tour starts (he qualified half-way through the 2015 season), he has three victories, matching his 20-year PGA Tour win total. One of those victories came in 2017, at the Allianz Championship in mid-February.

Another Hall of Famer in the field, Montgomerie is (sadly) best known for his zero major championships, despite 31 European Tour wins, 5 major runner-ups, and an all-time great Ryder Cup record. The Champions Tour is one place he doesn’t have to hold the “no majors” moniker, as he has won three of them on the senior circuit, including the 2014 U.S. Senior Open.

Coming off a 2016 season where he had a win, six top-four finishes, and finished second on the money list, Montgomerie’s 2017 has been a disappointiment, with just a single top 10 in seven events.

The 53-year-old Spaniard led last year’s U.S. Senior Open through three rounds, but a one-over 71 in the final round, dropped him into a tie for second. Jimenez has one win in each of his four Champions Tour seasons, but has not yet won a major, something he never did in his PGA Tour career either.

The Mechanic has an impressive 20 top 10s in 31 Champions Tour events, including a T7 in the Tradition and a T3 at the PGA Senior Championship. Jimenez has been tremendous off the tees in 2017, ranking in the top 10 in both driving distance and accuracy, which places him at #1 in total driving.

One of the most popular players on the Champions Tour, Mediate is most well-known for his performance in the PGA Tour’s 2008 U.S. Open, where he took Tiger Woods to the 19th hole in a Monday playoff. He fell just short in that classic bout, and would love to at least add the Champion’s Tour equivalent to his resume.

He has played terrible in the first two majors of the Champion’s season, with a T42 and a missed cut, but he has won a major recently, taking the 2016 Senior PGA Championship.

The 2013 U.S. Senior Open champion does not have a 2017 win, but has finished runner-up twice. At 299.0 yards per drive, Perry ranks second on tour in driving distance, trailing only the famously-long John Daly. That distance is actually the best of his career, either PGA Tour or Champions Tour.