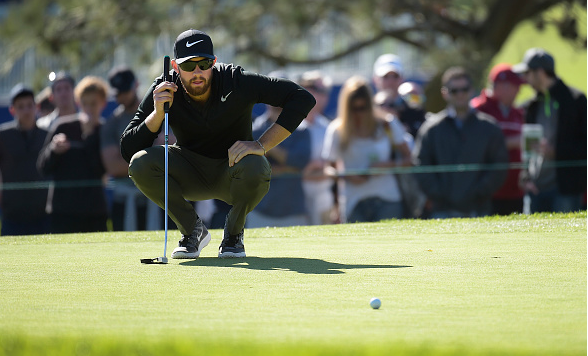 Incredible excitement would have been generated had fans been told three days ago that a former Stanford star would be co-leading the Farmers Insurance Open at Torrey Pines after three rounds.

That excitement would have been significantly less, however, had those fans been told the Stanford player would be Patrick Rodgers, who has 18 fewer career starts (61) than fellow Cardinal Tiger Woods has career wins (79).

Rodgers has been a great player in his own right, even reaching world #1 amateur status for a time, and now he has his best chance yet to grab his first career PGA Tour victory.

On a day where the entire field was finally playing the same course (Torrey Pines South), the 24-year-old Rodgers drove beautifully and shot a bogey-free 5-under 67 to get to -9 for the tournament, and claim a share of the 54-hole lead with defending champion Brandt Snedeker. One stroke back is the long-hitting Tony Finau and Chinese Taipei Olympian Cheng Tsung Pan.

Those bummed about all the big names missing the cut in La Jolla (Tiger, Jason Day, Dustin Johnson, etc) might be excited to hear that after an impressive third-round 68, three-time Farmers champion Phil Mickelson is just four shots back of the lead.

Patrick Rodgers, who last year, missed the cut in his only other appearance is having a very up and down season. In six events, he has missed four cuts, but played very well in the two where he did get to the weekend – with a T21 and a T10. We got the good Rodgers today.

In round three, Rodgers parred his first five and his last five, with five birdies in between. He leads the field for the week in strokes gained: off-the-tee and driving distance at a course where driving is notoriously difficult.

Co-leader Brandt Snedeker is going for his third win in this event, which would tie him with Mickelson for second most all-time. Snedeker got off to a hot start with birdies on 2 and 3, but was quiet from there on in, carding one bogey, one birdie, and 13 pars over his last 15 holes.

Snedeker had trouble on the greens, but was very accurate everywhere else, hitting 10/14 fairways and 15/18 greens in regulation.

Tony Finau moved up into a tie for third place by shooting a 5-under 67, which was tied with Rodgers and one other for the low round of the day. Finau exploded on the back nine, notching birdies on four of his last six holes. If he can continue this pace on Sunday, he will have his second career Tour victory, his first being last year’s Puerto Rico Open.

The other 67 came from the recently hot Pat Perez, who birdied 2, 3, and 4 before playing the rest of his round at 2-under. Perez already has a win in this young season, at the OHL Classic at Mayakoba, in addition to two other top 10 finishes in just five events. Perez’s four bogeys for the week lead the field.

For 15 holes today, the best player on the course was two-time Tour winner Jhonattan Vegas, who had his round at -6 over that stretch (five birdies and an eagle). Two late bogeys on 16 and 17 took a bit of the luster out of his round, but still posted a four-under 68 and is four strokes out of the lead, not an unmanageable deficit to make up, especially if he plays like he did for most of the third round.

Justin Rose was both the 18 and 36 holes leader of this tournament, but Saturday was not his day. Rose had just two birdies against three bogeys, and only hit 4 fairways on the day to shoot a 1-over 73.

Despite the poor round, Rose is still just two back and has both the talent and experience to pull back out front.

One off of Rose’s lead to begin the day was Canadian, and newest 59 club member, Adam Hadwin. Like Rose, Hadwin had just two birdies on the day, 11 fewer than he had in his record round last week. After posting a 2-over 74, Hadwin dropped into a tie for 18th place – now four-strokes out of the lead.

Jonathan Randolph tied for the low score of the second round, and got himself into the top 10, but did not look comfortable back on the South Course. After a double-bogey on the 18th hole, Randolph finished with a 3-over 75 and plummeted into a tie for 52nd.

Look Out for Phil

Three-time event winner Phil Mickelson had a quiet first two days, shooting 71-72, but made much more noise on day three. Mickelson shook off an early bogey and played his back nine (which was the front nine) in 3-under to post a 4-under 68.

Now just four strokes out of the lead, Phil will definitely be one to watch on Sunday, attempting to win his first tournament in over two years.

“The conditions were awesome today. It was so fun to play; this is why we come to San Diego, for the sun, and there was hardly any wind out there today, it was nice. If there is ever a day to get the South Course, it might have been today. It was fun to make a few birdies out there.”
–Patrick Rodgers, third round co-leader