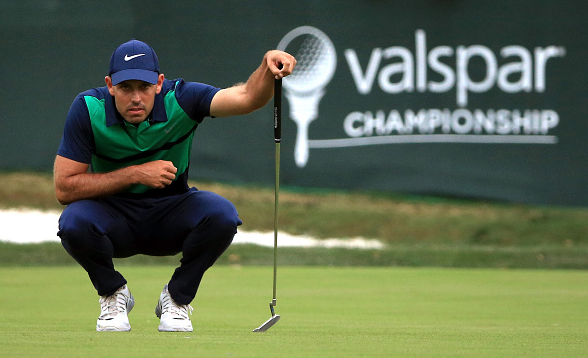 After a one-week excursion to Club de Golf Chapultepec, the crown jewel of Central Mexico’s rising golf community, the PGA Tour heads back to Florida, the U.S.’s winter golf mecca, for the Valspar Championship.

Nestled in Tampa, the Copperhead Course at Innisbrook Resort and Golf Club has been a site of some of the Tour’s most exciting golf since the turn of the century.

A difficult test, Copperhead gives up notoriously few red numbers, with last year’s champion only getting in at just -7, the kind of winning score usually only seen at the biggest events.

144 professional Tour golfers believe they are up to the challenge, and if this tournament is anything like it has been in recent years, it should be a lot of fun to watch.

The Valspar Championship, originally called the Tampa Bay Classic, was added to the Tour schedule in 2000 as a late-season event. The inaugural event was won by John Huston, the sixth win of his underrated career.

Huston was the defending champion for two years as the second edition of the tournament was scheduled for September 16, 2001, but was cancelled due to the 9/11 terrorist attacks.

In 2007, the tournament was moved to March, which has allowed it to bring in some stronger fields. In 16 editions of the tournament, there was been two multiple-time winners, with K.J. Choi taking the 2002 and 2006 events, and Retief Goosen coming out on top in 2003 and 2009.

Other big-name winners of the Valspar Championship include Jordan Spieth, Jim Furyk, and Luke Donald.

The defending champion of the Valspar Championship is Charl Schwartzel. Schwartzel began the final round five strokes behind Bill Haas, but on a day where red numbers were scarce, a series of long, clutch putts on the back nine led to a final round four-under 67, the lowest Sunday round in the field.

Schwartzel’s 67 got him to -7 for the tournament and into a playoff with Haas. A par on the first playoff hole was enough to net Schwartzel his first PGA Tour victory in nearly five years.

Lowest Final Score: The lowest final score at the Valspar Championship was the 266 (-18) shot by Vijay Singh in his 2004 victory.
Low Round: 61 (Padraig Harrington)

In April of 2011, a 27-year-old South African by the name of Charl Schwartzel executed one of the greatest four-hole stretches in major championship history, going birdie-birdie-birdie-birdie on 15-18 on Sunday to emerge from a leaderboard logjam that included names like Jason Day, Adam Scott, and Tiger Woods to win The Masters.

After such an emphatic breakout, many predicted sustained stardom for Schwartzel, who had already won six times in Europe. While Schwartzel would reach as high as #6 in the OWGR in the year following that triumph at Augusta, his post-green jacket PGA Tour tenure has been anything but special.

Schwartzel would not taste victory in the U.S. again until the 2016 Valspar Championship, where he (again) went on a tear down the stretch, with birdies on three of his last six holes to force a playoff with Bill Haas. Schwartzel needed just one extra hole to finish the job.

In the year since he lapped the Sunday field at Copperhead, he has three top 10 finishes, with a T4 at the BMW Championship being the best of them. He finished the 2016 season strong, but in just two 2016-17 events he has a T30 and a missed cut.

Statistically, Schwartzel was tremendous tee-to-green in 2016, but struggled on the greens and his driving accuracy ranked a paltry 142nd on Tour.

In Europe he played sparingly in 2016, but did win a mid-February event, and finished 3rd at the DP World Championship in Dubai. He has played just two 2017 rounds on the PGA, so not a lot is known about the current state of his game, but he should be coming into the week confident, and his iron game is likely to be as exemplary as usual.

If there is a headliner at Innisbrook, it is undoubtedly world #6 Henrik Stenson, the highest ranked player in the field. Stenson was set to make his 2017 debut at the WGC-Mexico Championship in Mexico City, but he had to withdraw just 11 holes in as a stomach virus did what hardly anyone in the past year has been able to do: shut him down.

The 2016 season was a rousing success for Stenson. He won the Open Championship in an all-time great performance; won the European Tour’s Race to Dubai; won a silver medal at the Olympics; and was the best European player at the Ryder Cup not named Thomas Pieters.

Statistically, Stenson was among the best on Tour in driving accuracy and greens in regulation percentage. If he didn’t already have America’s attention, he sure does now.

This will be Stenson’s third appearance at the Valspar. Last year he finished T11, and in 2015, he was solo-fourth, missing a playoff by a single stroke after bookend rounds of four-under 67. Copperhead is clearly a course that suits Stenson well, although lately, that has been every course.

The Newest 50-Something: Steve Stricker

First, however, Stricker will be making his 50s debut this week at Innisbrook, and despite his age, he should not be counted out.

Over the past four seasons, Stricker has played an abbreviated schedule, a choice he made in order to spend more time with his family. He may not play often, but when he does play, he makes it count.

In 15 events in 2016, Stricker had three tops 10s, including a T2 at the FedEx St. Jude Classic, and a solo-fourth place finish a month later in Scotland at The Open Championship.

The other top 10? That was at the Valspar Championship, where he finished T7 off the strength of a second-round 66, which tied for the low round of the week. That made three straight Valspar top-10s for Stricker, who was T4 in 2009 and T8 in 2010.

Nobody should be surprised if Stricker creates a new standard for 50-something golf, and if he does, it could start this week.

O’Hair was the 2008 champion of this event, coming out on top in a brutal week where the winning score was just 4-under par. In 2015, he nearly joined Retief Goosen and K.J. Choi as the only two-time winners of the Valspar, but came up short against Jordan Spieth in a playoff. He withdrew after round one last year.

The 34-year-old O’Hair won four tournaments in his first seven seasons on Tour, but has had trouble replicating his early career success, with no wins since 2011.   With two top-11 finishes in just five events, he may be coming back around in 2017.

Nobody knows Innisbrook as well as the 23-year-old local, who rode a 66-69 weekend to a fourth place finish in 2016 as an amateur.

Now a professional, McCoy has six missed cuts and a T41 in just seven events since last year’s Valspar, but his familiarity with the course makes him one of the most dangerous players in the field.

In the Valspar field, only Thomas and Henrik Stenson rank in the top 10 of the OWGR. Thomas has gotten his season off to a ferocious start as his three wins in just nine 2017 events matches the most wins anyone had in 2016.

This will be Thomas’ third appearance at Copperhead, as he was T18 last year and T10 in 2015. Currently leading the Tour in birdie average, Thomas is a threat on any course right now.

The 39-year-old from Sweden is the 2005 winner of this event, back when it used to be held in late October. Only a handful of players in the field have more PGA Tour victories than Pettersson, but his career has careened off a cliff since late 2015.

Pettersson left only five of 22 starts in 2016 with a check. In 10 events to start the new season, he’s already missed seven cuts. He should be as motivated as anyone in the field to get his career back where it once was.

Another player who will be 40 by year’s end, Donald won a four-man playoff at the 2012 Valspar, and then finished T4 in each of his next two tries.

The former world #1 is coming off a season where he was a runner-up twice, and in four 2017 events, his best finish is a T17 at the Genesis Open.