It was not quite the comeback story that the massive crowds at the Arnold Palmer Invitational were hoping for, but a fascinating tale still unfolded at Bay Hill Club and Lodge as a reinvigorated McIlroy birdied five of the last six holes to win by three strokes over Bryson DeChambeau. 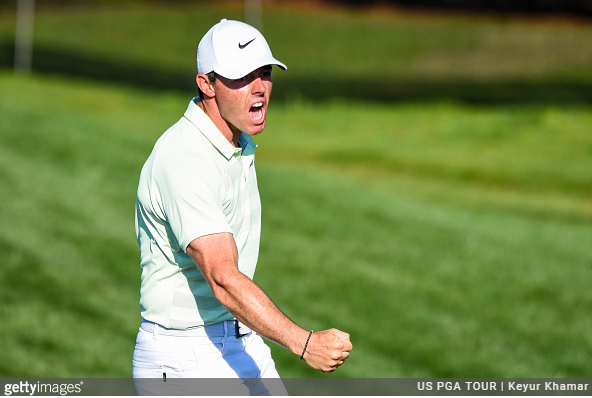 With one of the best putting performances by any player in recent memory, McIlroy overcame his abysmal recent form to shoot a final-round 8-under 64, and capture his first victory since the 2016 Tour Championship. That previous win came, ironically, on 09/25/2016, the same day that the API’s namesake, and golf icon, Arnold Palmer sadly passed away.

“Yeah, it was bittersweet. Obviously I had a great win and it was a great day for me, but in the overall picture of the big scheme of things that didn’t matter,” said McIlroy, reflecting on his 2016 win at East Lake.

“The game of golf had lost an icon, a legend, an inspiration to so many of us, and yeah, I probably wasn’t as ecstatic as maybe I would have been if Arnie hadn’t had passed away.

“So a little bit bittersweet and obviously it’s ironic that I come back here 18 months on and win for the first time at Bay Hill and everything that’s associated with that.”

Perhaps the most incredible thing about this victory, however, is that Rory winning was actually considered a surprise. He was coming off a winless season plagued by a nagging rib injury, and after posting some quality results in Europe early in 2018, his four PGA Tour events of the calendar year had finishes of CUT, T20, T59, and CUT, respectively, and those results gave Rory much longer odds than he is accustomed to having.

Still, it was expected that the four-time major winner would come back into world-class form at some point, and that ended up being this week.

“Really proud of myself, how I hung in there over the past sort of year, with injuries and taking a little bit of time off at the end of last year to sort of get myself right coming into this year and all that work, hard work has finally paid off,” continued McIlroy.

“I kept telling everyone, even when I was missing cuts and finishing 60th, it wasn’t that far away, so just a couple little tweaks here and there and it’s nice to be in this position again.”

As for the comeback victory most were expecting, eight-time API winner Tiger Woods got himself into the mix with a phenomenal start on Sunday, but a few stumbles down the stretch kept his long winless streak intact. A 3-under 69 led to a T5 finish, his second consecutive start, though, inside the top 5. 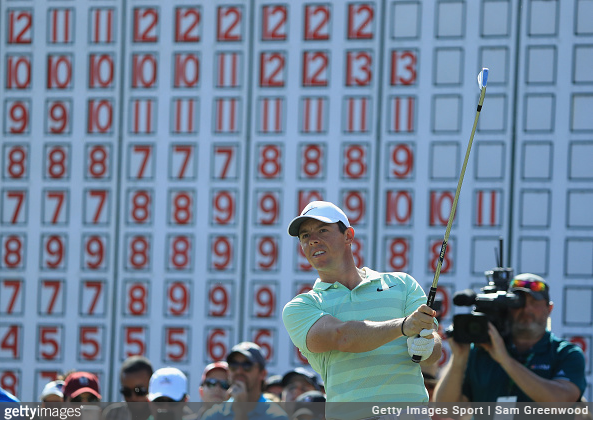 What didn’t Rory do this week? His final-round 64 was the field’s co-low-round of the week. He led the field in birdies, driving distance, scrambling, and proximity to the hole, but where he really inflicted his damage was with the putter. 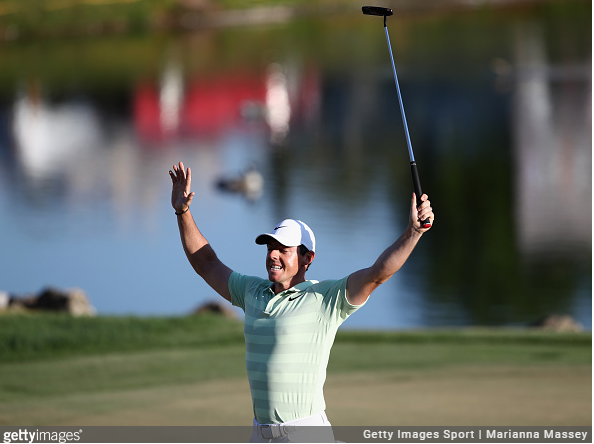 McIlroy, who has a reputation for being less than stellar with this flatstick, gained an unfathomable 10 strokes on the field this week with putting, which led the field by a mile. His game showed absolutely no weaknesses, which is incredible considering that coming into the week, his game was seemingly filled with question marks.

“It just takes something just to click into place and something clicked into place with my long game,” said McIlroy.

“Obviously something clicked into place with my putting as well. This is the result. So it’s, it’s just so nice to see everything come together finally.”

After shooting 69-70-67 over his first three rounds, McIlroy came into Sunday just three strokes off the lead. He parred his first five holes, but started an explosion with a birdies on 6, 7, and 9 to make the turn in 3-under 33. He then played his back nine to a scorching 5-under 31 to post a 64 and reach 18-under for the week.

WHAT IT MEANS FOR McILROY

This victory means that Rory’s game is back in immaculate form, less than three weeks before the start of The Masters, the only major that the 28-year-old needs to complete the career grand slam. 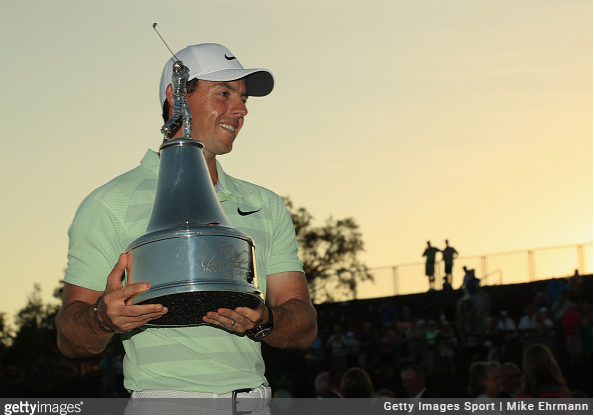 “It’s huge for my confidence going into the next few weeks and I kept saying I didn’t need a win going into Augusta to feel like I had a chance, I just wanted to see signs of good golf, and thankfully I’ve been able to get both today,” continued McIlroy.

After recently falling out of the top 10 in the Official World Golf Rankings – the first time since he was an 18-year-old in 2008, McIlroy is projected to jump back inside the top 10 with this 58 OWGR point victory.

Everything seemed set up for Tiger Woods to capture the first victory of the newest chapter of his career. He finished runner-up last week at the Valspar Championship in nearby Tampa. He has consistently made magic happen at Bay Hill, winning a whopping eight times. 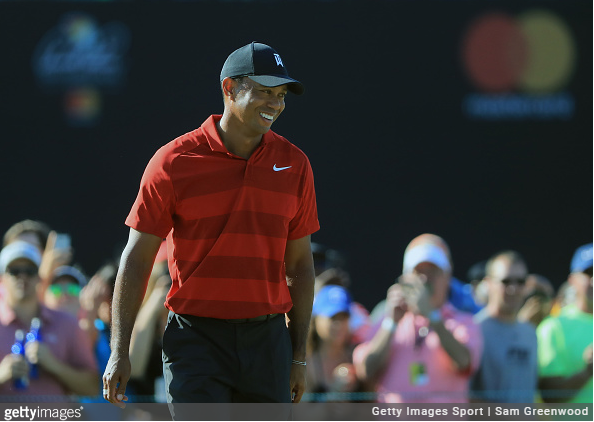 The numerology set up for a win too: Sunday marked 1687 days since his last victory on Tour, the exact same number of days between wins when prime rival Phil Mickelson took the title at the WGC-Mexico Championship a few days ago.

It seemed too perfect to not happen.

But… it didn’t happen. Not that Tiger did not give it his best go, though. When he birdied the 13th hole – his sixth birdie of his final round, Tiger was just a stroke off of the lead.

However, being several holes ahead of the others in the leader mix, Tiger knew he needed to keep the foot on the pedal, but his tires were metaphorically slashed when a wayward tee shot on the par-5 16th – statistically the easiest hole on the course – sailed well left and landed OB. Attributing the poor drive to a lack of “commitment,” he ended up with a bogey 6.

“I was caught. I didn’t decide what I was going to do. If I hit driver I got to fit it, I got to cut it in there. And I was, in the back of my mind, I said, why don’t you just bomb it over the top,” explained Woods.

With the wind out of his sails, Woods bogeyed the 17th too, and needed a long putt to fall on 18 to avoid a similar fate there. Going 2-over on the final three holes meant a final-round 3-under 69 for Tiger, which was good, but not enough.

Still, it was a 10th consecutive round of par or better for Tiger, which has to be extremely encouraging.

“To be in contention, if you would of asked me at the beginning of the year that I would have had a chance to win two golf tournaments, that’s, I would have taken that in a heart beat,” said Woods. “So very pleased”

For now, he is not set to tee it up again until The Masters. His driver was a mess, as he finished 71st in the field in strokes gained: off-the-tee, but the rest of his game is still clicking. He knows what he needs to work on most before Augusta.

After Rory’s late back-nine heroics, only one man in the field still had a prayer standing on the 18th tee: Bryson DeChambeau, who needed to somehow pull an eagle on the 72nd hole to force a playoff. He bogeyed the hole to finish three strokes behind Rory, but the solo-second place finish was DeChambeau’s best since his victory at the John Deere Classic last July. 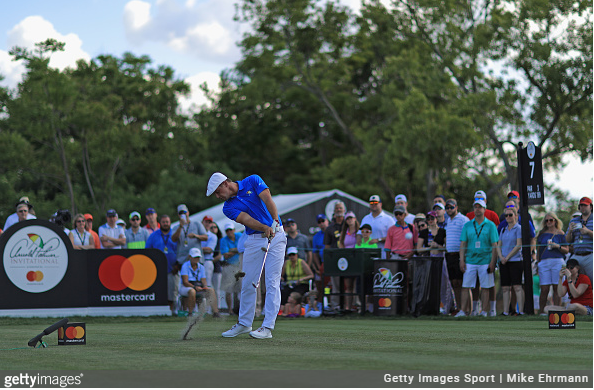 It was still a phenomenal Sunday for young Bryson, whose name looked a little out of place with the other A-listers in the leadership mix.

Playing in the final pairing with 54-hole leader Henrik Stenson, DeChambeau carded four birdies and a late eagle on 16 to shoot a 4-under 68.

“Ultimately it kind of stinks, but at the same point in time I’m happy with where my game’s at. Obviously finishing second out here is not an easy task with all these great players and this is, honestly, my first time being in the big thick of things with a lot of guys,” said DeChambeau, who hit 15 of 18 greens.

“So it was great to be comfortable out there and to actually make a couple clutch putts. And then that last one I was already out of it anyway and then there was — actually the flag was fluttering right over my putt and so that just kind of threw me off a little bit.

“Hey, that’s how it goes. Still had a great week.”

One better than DeChambeau on Sunday, but one stroke worse for the week was Justin Rose, who continued his recent tear of phenomenal results, shooting a final-round bogey-free 67 to finish in solo-third.

Rose led the field in birdies for the week, and made an impressive push on the weekend, carding just one bogey over the tournament’s final two rounds.

“I’m really happy. I think just the way I hit the ball this weekend is the best I’ve hit it all year. Today I felt really solid with the blade. Yeah, really game’s in a nice spot,” said Rose.

Defending tournament champion Marc Leishman has not been on his game lately, but was tremendous on Sunday, matching Rose’s final-round 5-under 67. With a round that comprised seven birdies, Leishman rocketed 28 spots up the final leaderboard, finishing T7.

THE UVAs OF BAY HILL

Nobody at Bay Hill is stinging more over the past few days than the University of Virginia men’s basketball team, but there were a number of player in the field who would like to have their Sunday back. 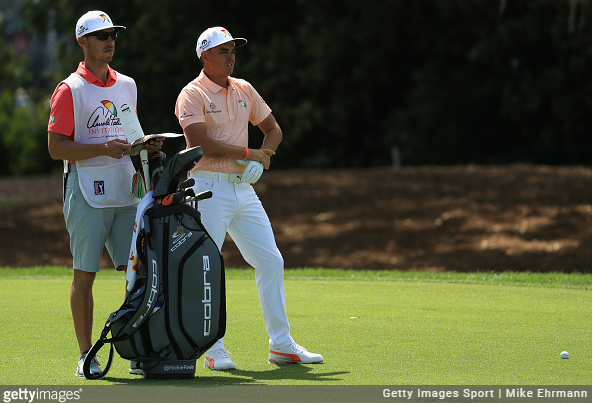 Topping that list is tournament co-host Rickie Fowler, who had been off his best form lately, but was in the mix coming into the final round at Bay Hill, beginning Sunday four strokes back, and getting even closer when he was -2 for the day after 13 holes.

Unfortunately, he went stagnant after that, going par-par-par on the next three, and then his tee shot on the par-3 17th landed in the water leading to a double-bogey. Fowler then went on to double-bogey 18 too, turning a great chance for a win into a 2-over 74 and a T14.

It is the second time in his last three tournaments that he has tanked on Sunday when he was in contention.

Starting in the same position as Rickie and also leaving the day with a 2-over was the duo of Charley Hoffman, who played 14-17 2-over, and Byeong Hun-An, who struggled to find consistency on the front nine, and then torpedoed his chances of a top-10 finish with a bogey-bogey-bogey stretch on 15, 16, and 17.

Jason Day, the 2016 Arnold Palmer Invitational champion, got his tournament off to a surprisingly mediocre start with a 73-71 on Thursday and Friday, but made a furious charge up the leaderboard on Saturday with a 5-under 67. Needing an unbelievable Sunday to push the leaders, the man who had a win and a runner-up in his last two starts carded bogeys on 2, 3, and 5 to undo most of his great work from Saturday.

Day composed himself and played the final 11 holes in bogey-free 3-under, but the start was too much to overcome and he finished with an even-par 72. Day was T22 for the week.