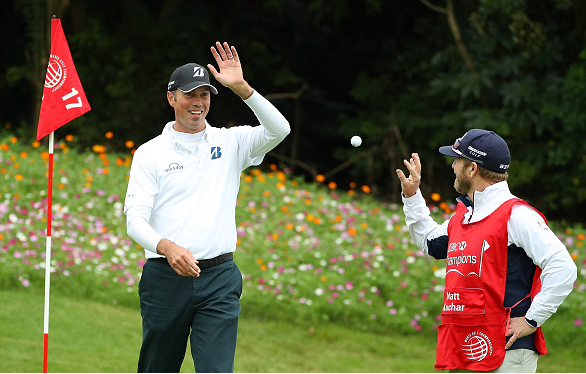 Matt Kuchar headed to Sheshan International’s 17th hole at -7 for the tournament, and tied for 14th place. The Olympic Bronze medalist walked to the 18th at 9-under, and tied for 8th – thanks to an ace on the (now) 193 yard par-3.

But the storyline afterwards centered around how Kuchar lost out on a brand new Cadillac, which was being promoted all week for a hole-in-one.

“That was probably one of the saddest hole-in-ones I’ve ever had, in that most of the time a hole-in-one, you’re just overjoyed with excitement,” said Kuchar. “But then there’s a car sitting there, the most beautiful Cadillac sitting on a tee with the note below saying, “This hole is under 200 yards, thus no longer qualifies for the insurance for the giveaway for the prize.””

As the story goes, Henrik Stenson had requested the tee boxes be moved up, as the area had taken a beating in the first two rounds with all the rain. And so with the hole now playing under 200 yards for final two rounds (3 and 4), the insurance policy was voided.

“Henrik came up and said, “My fault, the back tee box was not in very good shape.” He was the one that asked for the tees to be moved forward,” said Kuchar. “I guess that made the hole far too easy. I guess.”

The 38-year-old Kuchar has earned nearly $30 million in just the last 7 years playing golf on the PGA Tour. He currently sits at T8 and would be on track to win another $185K for a week of golf in China. Somehow, we don’t feel too bad for the Kooch.