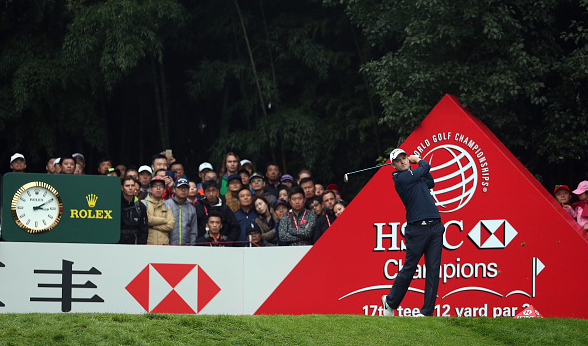 After a relatively quiet few weeks on the international golf stage, the world’s best gather in Shanghai, China this week for the World Golf Championships – HSBC Champions. While all 78 players in the field are battling for the same winning share of the same prodigious $9.5 million purse, the HSBC Champions means different things to different players, depending on where that golfer usually plays.

For PGA Tour members, this is the third tournament of the new season, and the first elite big-money event. It also awards 550 FedEx Cup points, so it is a tremendous opportunity to get an early good start in the standings.

Players like Adam Scott, Jimmy Walker, and Patrick Reed have shown in recent years how beneficial a strong start can be. For those who play on the European Tour, the HSBC signals the end of the regular season, as opposed to the start.

The Race to Dubai Championships start next week, and there is still some jostling in the standings to be done. This tournament also features players from the Asian Tour, the Japan Golf Tour, the PGA Tour of Australasia, and the Sunshine Tour.

Then there are six players in the field from China, locals who want to make their mark in a growing sport in a nation that is still working on embracing the game. They might be the most motivated of all this week.

Sheshan Golf Club, and the HSBC are infants in golf years. Sheshan GC was established in 2004, but what it lacks in age and tradition it more than makes up for in quality.

Known as a crowning jewel of Asian golf, it is commonly featured in “best of” lists. If someone in China wants to golf, this is basically THE place to go.

The WGC-HSBC Champions has been played in Shanghai since 2005, just four years after Shenshan was founded, although from 2005-2008 the tournament was not an official WGC event, but still drew an incredible field.

In those four seasons, the tournament was won by David Howell, Y.E. Yang, Phil Mickelson, and Sergio Garcia, respectively. Mickelson took the title again in 2009, the first year it was a WGC event. Since 2013, the HSBC Champions has been an official PGA Tour event.

The defending champion is Russell Knox. Knox, a native Scot, shot four rounds of 68 or better to win by two strokes over Kevin Kisner. Danny Willett, who would go on to later win The Masters, shot a course record-tying 10-under 62 in the final round, but was not quite able to catch Knox and settled for a T3 with Ross Fisher.

Knox was nearly unable to compete; he was a 7th alternate, and his wife had to spend the day in Kuala Lumpur getting him a visa.

1. First Impressions For Many

Technically, this is the third week of the new PGA Tour season. In week 1, Brendan Steele went low on Sunday to take the Safeway Open, and in week 2, Justin Thomas successfully defended his 2015 title at the CIMB Classic in Malaysia.

However, this is the first event of the new season where we will see the elite of the elites. That is not to say that everyone is in China this week; Jason Day, Jordan Spieth, and Phil Mickelson did not make the trip, but as a WGC event, it is by far the best field of this new season.

There are two tournaments this week, as the Sanderson Farms Championship tees off in Mississippi, but this is the event with the big names, big purse, and extra FedEx Cup points.

Here are some of the big names to watch for:

Rory has been a bit up and down in recent years, although his worst is still among the best. When we last saw McIlroy he was dominating in the FedEx Cup playoffs with comeback wins at the Deutsche Bank and the Tour Championship, with the latter earning him the $10 million FedEx Cup. He followed that up with an impressive performance as one of Team Europe’s best players at Hazeltine, going 3-2-0, one of only three Europeans (Pieters, Cabrera-Bello) to net a winning record in the losing effort.

It should be scary to the entire PGA that during what was considered a down year, Rory STILL took the FedEx title. If 2016-17 brings the unstoppable Rory, as opposed to the very good Rory, this could be an historically great season. McIlroy is a two-time WGC champion, taking the 2014 Bridgestone Classic and the 2015 Match Play.

As well as Rory McIlroy played at Hazeltine, Reed was even better. His 3.5 points led team America, and his Sunday singles triumph over McIlroy set the tone for the U.S. victory. Reed is no stranger to great early season play, winning twice by mid-March in the 2013-14 season, a January victory the following year, and then last season he finished top-10 in his first four tournament, including two runner-ups.

In addition to being the American MVP at the Ryder Cup, Reed won The Barclays, leading to a finish of third in the final FedEx Cup standings.

This is not Reed’s 2016 debut, as he finished T51 at the CIMB Classic after an uncharacteristically poor 77 in round 4. Always a flashy, outgoing character, Reed will be anxious to show everyone that last Sunday was a fluke, not indicative of his current form. If Ryder Cup Reed shows up in Shanghai, he will be a pain for the rest of the field.

The last we heard of DJ, he was being named Player of the Year, a well-deserved honor upon the conclusion of a season where he won three times, including at the U.S. Open. His 15 top 10s in just 22 events was easily #1 on Tour.

As amazing as his 2015-16 season was, DJ could do even better this year. His recent win at the BMW Championship was chased by a disappointing T6 at the Tour Championship, where Johnson let the FedEx cup and its $10 million prize barely slip from his grasp after a final round 73. It will be interesting to see if any residual doubts creep into his early 2016-17 form, although with as much as he has overcome in his career, that seems doubtful.

2. Last Impression for Others

The HSBC Champions might be an early season event for the PGA, but for the European Tour, it is crunchtime. This tournament marks the last event of the European Tour regular season, with the three-week Race to Dubai finale beginning next week.

A number of players in the field are very motivated to improve their Race to Dubai standing, with the current top 10 being the following:

All ten of those players are in the HSBC field, so it will provide a great opportunity to see where their games are going into the finale.

Russell Knox was nearly flawless in his 2015 victory in Shanghai, going 67-65-68-68 and holding off a number of competitors down the stretch, including Kevin Kisner, Danny Willett, and Branden Grace.

It was Knox’s first career PGA victory, and he would go on to add a second win at the Travelers Championship in August, a tournament much more remembered for Jim Furyk’s final round 58. It was a breakthrough season for Knox, as he added two runner-ups to his two 2015 victories.

Knox was widely considered to be the biggest snub on the European side of the Ryder Cup, and captain Darren Clarke has to be wishing now that he had taken Knox over Lee Westwood, who was a complete disaster at Hazeltine.

The HSBC victory was his only appearance at the event. Obviously, Knox feels comfortable on the course.

Paul Casey, an Englishman who was sorely missed by Europe at the Ryder Cup (he was ineligible as he did not renew his European Tour membership) is on an absolute tear as of late, and people are wondering when/if he will ever cool down.

Going into the CIMB Classic, these were Casey’s previous four results.

Casey was not quite as good in Malaysia, fading to T21 after a first round 65, but clearly something is going right in his current game. He finished T23 at least year’s HSBC.

Pieters was arguably the best player at the Ryder Cup, leading both teams with 4 points and a 4-1-0 record in his first appearance. He also made waves by contending at the Olympics.

Pieters looks like a budding star for Europe, and a WGC stage will likely not be too big for him. He won the Made In Denmark in late August, and is currently 16th in the Race to Dubai standings.

Molinari is not one of the biggest names in Europe, but he was recently named the Hilton European Tour Player of the Month off the strength of a victory at the Italian Open.

Stenson, the flawless winner of the Open Championship, is coming off a career season. He ranks 2nd in the current Race to Dubai standings, and as a former FedEx Cup champion, Stenson knows how to play at this time of year.

This is the 2016-17 PGA debut for Johnston, an English sensation who has quickly become one of the more popular players on Tour.

He recently earned his PGA Tour Card through the Web.com playoffs, and will likely be among the most closely watched players in the field.