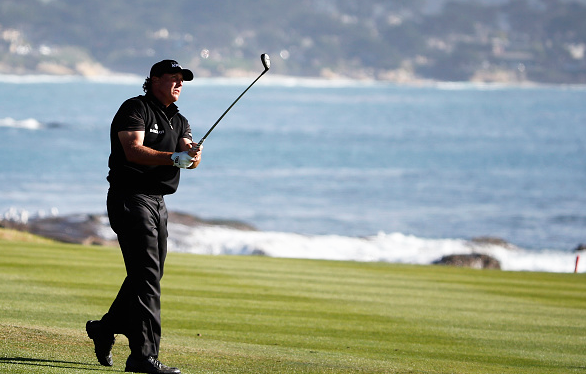 Some argue that the AT&T Pebble Beach Pro-Am marks the beginning of golf on TV for the average fan. With the NFL season finally over, and smack dab at the beginning of what is considered the dead month for sports fans, the PGA Tour simply has more (potential) eyeballs to reach.

Coupled with the fact that the majority of sports fans are stuck in a foot of snow, and/or freezing temps, the majestic beauty of Pebble Beach’s coastal landscapes act as a form of escapism. Finally, sprinkle in some celebrities, athletes (and some living legends), and it’s no wonder that Pebble is considered the defacto start of the golf season on TV!

With the table set, let’s look at this week’s power picks for the season’s first mainstream golf event of the season, and the second-to-last tournament on what is called the West Coast Swing.

Three of these four also make up 60% of this week’s power picks with Reed the only top-10er getting snubbed – due to our admitted Phil Mickelson bias.

Here are this week’s power picks for the AT&T Pebble Beach Pro-Am.

The world #1 Day has started the 2016-17 season unimpressive with a T12 (in a 32 player field) at Kapalua, and a MC at Torrey Pines. If Day is going to kick start his season soon, Pebble Beach is a good place for him. He has finished T11, T4, and T6 in his last three appearances.

At the very least, Day will be looking to crack the top-10 where he was a machine last season, finishing with 10 top-10s in only 20 starts – a 50% clip for those keeping score.

The two-time major champion has played the past four AT&T Pro-Ams, finishing in the top-25 of all four with a best result of T7 two years ago.

Johnson, the reigning PGA Tour Player of the Year, who was ranked as high as #2 as recently as the Tour Championship, also missed the cut (like Day) at Torrey Pines, shooting +2 over 36 holes.

The top-ranked European player in this tournament (by a mile), the former U.S. Open winner and Olympic Gold Medalist Rose has gotten his 2017 off to a tremendous start with a runner-up finish at the Sony Open and a T4 at the Farmer’s Insurance Open.

Rose is only one of three players ranked inside the top-20 in both OWGR and FedEx Cup Points. Despite a lengthy pro career, Rose never played the AT&T Pebble Beach Pro-Am until last season, where he finished impressively at T6.

Mickelson is anxious to end a victory drought that has been going since his surprise win at the 2013 Open Champions. Pebble may be the place. As a 4-time winner, Mickelson was in prime position to win #5 last year as the 54-hole leader, but a disappointing final round even-par 72 ended in another runner-up finish.

Mickelson has played well as of late, and especially well for someone coming off of two offseason hernia surgeries. He was T16 last week in Phoenix, T14 the week before at Torrey Pines, and T21 the week before that at the CareerBuilder Challenge.