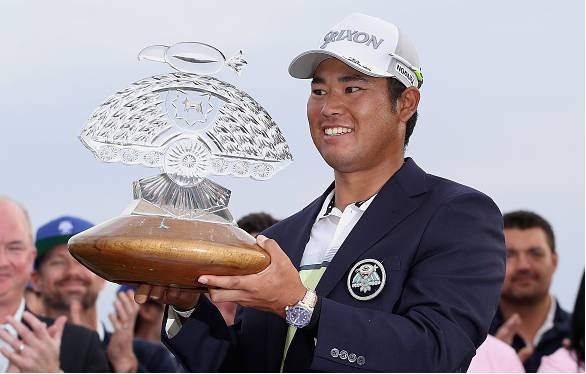 In last week’s Money Report we wrote: “The only player this week [Waste Management Phoenix Open] with a chance to leapfrog Thomas, with a win, would be the defending champion, [Hideki] Matsuyama.”

Well, that’s exactly what happened. And so with the win, the 24-year-old star from Japan is back atop the PGA Tour money list.

Heading into the week of the star-studded AT&T Pebble Beach Pro-Am, Matsuyama ($4.3M) is up by about a $500k on Justin Thomas – who missed the cut in Phonenix, and remains at $3.8M.

The winner at Pebble Beach takes home a check for nearly $1.3M, and with both Matsuyama and Thomas off this week, the top 2 are guaranteed to remain intact for next week’s report. Pat Perez, who withdrew and made nothing in Phoenix, remains at number 3 with $2.1M.

The win at Phoenix was the second (officially) of the season for Matsuyama and it gives him back the title of world’s hottest player – which was held by Justin Thomas for a few weeks.

The young Japanese is ranked #5 in the world and is knocking on the door of the top-3. The win gives Matsuyama more than $4 million in earnings this season, and it’s barley February.

To put that into perspective, last season, only 12 players topped the $4 million mark by playing an average of 22.5 events. Matsuyama has done this in just 6 events.

Last week we had 13 players inside the $1M club. This week, we can add another. Canadian Adam Hadwin, added a third top-15 finish to his early-season resume, and is now in 13th place at $1.07M.

Hadwin joins Charles Howell III, Gary Woodland, and Russell Knox as the four players (of 14) who have made over a million this season without a win. All the others have made their cake via a victory.