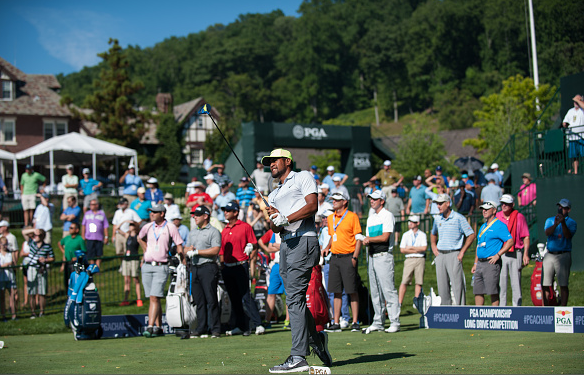 It looks like Tony Finau is someone who responds well to pressure. In his first PGA Championship appearance last year, Finau was right in the mix and finished in a tie for 10th place. In his first British Open appearance two weeks ago, he was once again in the spotlight, but stumbled in the final round finishing in a tie for 18th place. He ranks 6th in Driving Distance on the PGA Tour and should factor in this week if he can use it to his advantage.
FedEx Cup: 42 | OWGR: 77

The 23-year old Argentinian rookie Emiliano Grillo has put together a great season and sits comfortably on the 30th spot in the FedEx Cup. Although he had a disappointing finish last week at the Canadian Open, he was quite impressive in his British Open debut, finishing in a tie for 12th place. Grillo has made the cut in 17 of his 20 starts this year, including all the three Majors.
FedEx Cup: 30 | OWGR: 37

Justin Thomas started well at the British Open last week, but derailed through the final three rounds and finished in a tie for 53rd place. But don’t expect it to bother him too much. Thomas sits in the 11th place in the FedEx Cup standings. To go along with his win at the CIMB Classic in Malaysia, he has two other T-3 finishes this season, one at the Players Championship and another at the Honda Classic.
FedEx Cup: 11 | OWGR: 40

JB Holmes’ best finishes this season have come at big ticket events. His three Top-5 finishes came at the Masters, the Memorial and the British Open. With his length of the tee, he can very well turn Baltusrol into a Pitch & Putt course. All he has to do is keep it together for four rounds. This season, he ranks 7th in Strokes Gained: Off the Tee and 2nd in Driving Distance.
FedEx Cup: 34 | OWGR: 16

Steve Stricker is another player who is coming into the PGA Championship with some good form. Following his runner-up finish at the FedEx St. Jude Classic, the semi-retired pro had an extremely good outing in Scotland. If it wasn’t for the quadruple bogey in 2nd round, you never know, he might just have been right there along with Stenson and Mickelson. His best finish at a Major came in the 1998 PGA Championship, when he finished runners-up to Vijay Singh.
FedEx Cup: 88 | OWGR: 87