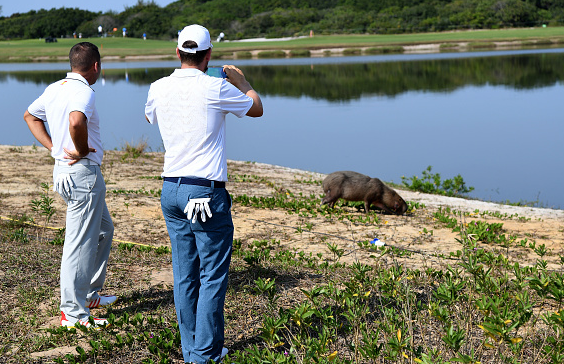 Once it was announced that golf would be back at the Summer Olympics, the Rio 2016 Organizing Committee, after a thorough process, had selected Gil Hanse to design a golf course specifically for the Games.

To get the contract, Hanse had to compete against the biggest names in the business including Jack Nicklaus, Gary Player and Greg Norman.

The golf course is built at Reserva de Marapendi in Barra da Tijuca, the district that contains the largest number of Olympic Games venues. After the event, the course will open to the public.

Here are three things you to know about the course.

The Olympic Golf Course is home to a variety of wildlife. Players through the week have found mini crocodiles called Caimans and the largest rodent in the world, the Capybara. The course is also filled with owls, boa constrictors, monkeys and three-toed sloths.

The Olympic Golf Course is a very links style course, with a likeliness also to the sandbelt courses of Australia. There is no rough anywhere and no trees either. Once the balls run out of fairway, they’ll end up in the native areas of grass and sand. Justin Rose pointed out, “It has like an Openish-look, sort of a rugged look, to it.”

The finishing stretch of the course has been the big buzz with players and is sure to bring some drama to the event. The 16th is a drive-able Par-4 about 300 yards long. The 17th, at 133-yards, is the shortest Par-3 on the course. The 18th is a 571-yards long Par-5, providing a great setting for a risk-reward finishing hole.

In this video below, designer Gil Hanse gives the inside story on this beautiful golf course.