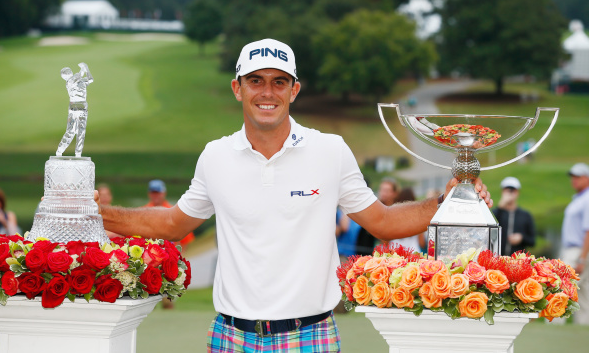 The 2015-16 season marks the 10th playing of the FedEx Cup tournament. Before the PGA Tour Playoffs officially begin tomorrow, here are 8 records to know.

The FedEx Cup has a purse of $35 million which is distributed to all players right down to the guy ranked 125th in the standings. Tiger Woods obviously leads the all time list with two $10,000,000 pay-outs over the years. His total stands at a mind-blowing $25,275,000.

Not surprisingly, Steve Stricker is the highest bonus money earner among players who haven’t lifted the main trophy. His total stands at $8,500,000 which includes a second place finish and two third-place finishes.

2. Most Wins at the Playoffs

3. Most Weeks Spent as No. 1 in the Standings

Once again, Tiger Woods holds the record for having spent the most weeks ranked as No. 1 in the Playoffs. He’s spent a total of 83 weeks atop the FedEx Cup standings since 2007.

His closest competitor is Jimmy Walker, who held the top spot a total of 48 weeks.

Billy Horschel ranked 69th in the FedEx Cup standings entering the Playoffs in 2014, and then proceeded to miss the cut at The Barclays.

5. Players to Make the Playoffs Every Year

16 PGA Tour players have made the FedEx Cup playoff tournament every year.

6. Players to Qualify for the Deutsche Bank Championship Every Year

Out of the 16 players above, only 9 have made it to Boston, the 2nd Playoff event, every year. These players are Bubba Watson, Justin Rose, Brandt Snedeker, Charley Hoffman, Jim Furyk, Ryan Moore, Matt Kuchar, Phil Mickelson and Charles Howell III.

7. Players to Qualify for the BMW Championship Every Year

Out of the 9 players above, only 4 have made it to the 3rd Playoff event every year. These players are Bubba Watson, Charley Hoffman, Jim Furyk and Phil Mickelson.

8. Best Finish by a Rookie

Jordan Spieth has the best finish by rookie in the FedEx Cup. In 2013, he finished 7th in the final FedEx Cup standings.