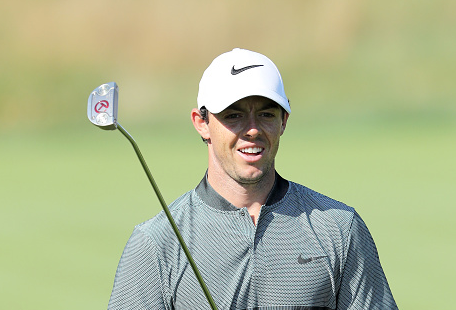 Rory McIlroy was one of the players the PGA Tour rolled out as part of its Wednesday pressers in preparation of The Barclays and the start of the FedEx playoffs.

And the big discussion was his deal with the Nike. With the swoosh brand now officially out of the golf equipment business, reporters wanted to know what the world’s #4 ranked golfer will be playing next season.

McIlroy confirmed that he’s switching to a Scotty Cameron putter but said he’ll “tinker” with equipment over the next year or so before signing on with any particular equipment company.

“I’ve made a change in putter, but I think that was inevitable after my performance at Baltusrol,” McIlroy said on Wednesday at Bethpage. “I wouldn’t be surprised to see me not go with a manufacturer for a year or two, just sort of play with what I want to play, play with what I’m comfortable with, and go from there.”


Of course, McIlroy doesn’t mention that the Nike contract he signed in 2013 was for five years at $15 million per year.

Next year is the final year of the original deal, so it would make little sense for Rory to rush out and sign with someone else, given that his negotiating power is not what it once was.

A Titleist or TaylorMade, or even PXG, are not going to pay McIlroy anywhere close to $15M per. In 2013, when McIlroy was coming off his break through 2012 season, and at his peak, Titleist reportedly offered him something in the $10 million range. And, again, that was at a time when McIlroy was far and away the best golfer in the world.

By not signing, he still rakes in the big bucks from Nike, and can use the 2017 season to try to win a major (or two), improving his bargaining power.