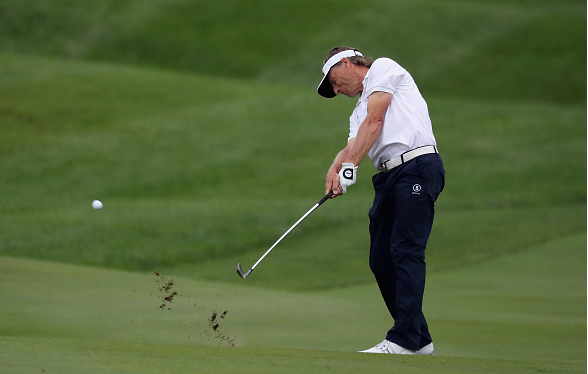 PEABODY, MA – The results of the first two Champions Tour majors were as follows:

While those results are impressive, especially considering that Langer is 59 years old, they’re also very unsurprising, as Langer has been well engaged in a decade of Champions Tour dominance.

Asked how he’s performed at such a high level, for so long, when most senior tour professionals fade after about the age of 55, the 32-time Champions Tour winner cited his mental toughness, supportive family, and strong faith as primary factors.

“There’s a lot of things that go into being consistent and staying at the top and near the top. It’s not just one or two things,” said Langer. “You got to have a decent technique. You got to be mentally tough, have a good team around you, good family. In my case, it’s a lot to do with my faith gives me a lot of strength and security.

Among Langer’s Champions Tour accomplishments are:

In relation to his peers, Langer on the senior tour has been like Pedro Martinez in his prime: nearly untouchable. He is coming off a 2016 season where he had four wins, four runner-ups, and 18 top 10s in 21 events. His $3 million in earnings was over double what the man in second (Colin Montgomerie) earned.

So far, 2017 has been more of the same, with three victories in ten events, including the two majors, eight top 10s, and his earnings of $1.77 million is nearly double that if what second place Scott McCarron ($940,351) has earned.

The ability to play for millions of dollars into his late 50s is not lost on Langer. The father of four feels “blessed” to still be playing golf for a living as he approaches 60-years-old.

“We’re very blessed in this game of golf that we have this opportunity because most other sports, you know, you turn 35, and you’re done, pretty much,” said Langer in the press room at Salem Country Club. “Tennis, they have a few matches for the over 40s or whatever they are. I don’t know how old they are. And, you know, a few other sports may try it, but many of them, they can’t.”

Langer was the subject of small controversy earlier in the year, when he won the Regions Tradition, as he had been declared the all-time leader in Champions Tour majors, but Gary Player believed that he and Langer were co-leaders.

Player is credited with six majors, but twice won tournaments that were not considered majors at the time, but are now. Langer put that debate to rest when he went out the very next week and won the Senior PGA Championship, his ninth career major.

Langer does not actually appear to be aging, as he is No. 1 on Tour in scoring average (68.06) and No. 1 in greens in regulation, among a plethora of other strong statistical rankings.

How does he remain almost ageless? The German star feels that the sport of golf, with its emphasis on technique and strategy, allows golfers to improve even as they age.

“In golf, it’s different. I think you can still improve in your 40s and 50s and probably even in your 60s because it’s not all about how fast you are and how strong you are,” Langer said. “It’s about technique and mental — the mental part of the game and knowing what to do and what not to do.”

A still-improving Langer has to be a scary and frightening thought for the field at Salem.

Tom Gorman contributed to this story.