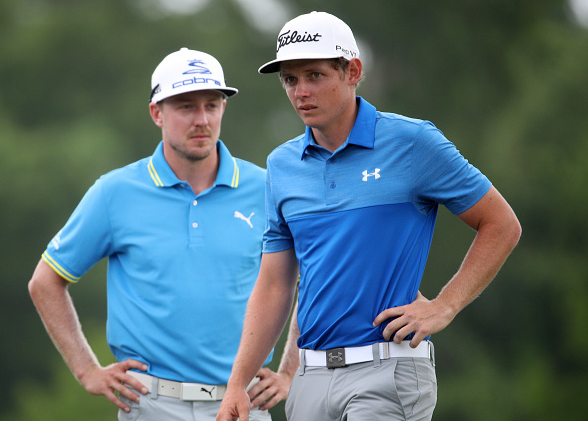 Jonas Blixt and Cameron Smith extended their bogey-free run through 54 holes at the Zurich Classic – posting a 4-under 68 on Saturday to widen their lead to four shots.

Blixt and Cameron carded four birdies to get to 19-under, growing the lead that stood at just one shot through two rounds. They are the only team without a bogey.

Two teams, Kevin Kisner-Scott Brown and Nick Watney-Charley Hoffman, were tied for second at 15-under. First round co-leaders, Jordan Spieth and Ryan Palmer, are five shots back at 14-under and in solo-fourth. Rounding out the top-5, at 13-under, is the twosome of Chris Stroud and defending Zurich champ, Brian Stuard. [1]

“It’s like going back to playing as a kid. I don’t feel like there’s any stress at all out there.”
–Jonas Blixt

“Feels like back in the amateur days. It’s just nice to go out there and relax and have some fun.”
–Cameron Smith

Blixt drops a birdie on the final hole to extend the lead to four. Dead straight, center of the hole.

A fitting end to a nearly flawless round.