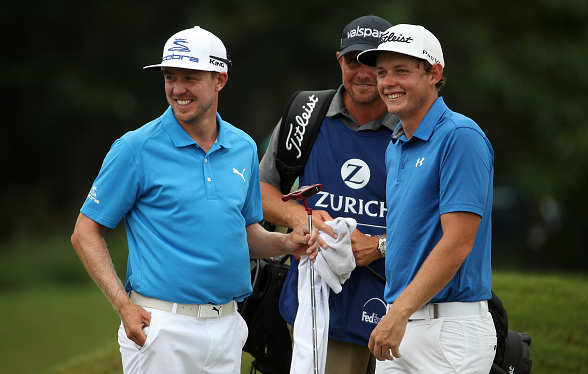 Jonas Blixt and Cameron Smith fired a 10-under 62 in the second round of the Zurich Classic at TPC Louisiana. Blixt and Smith have a two-day total of 15-under and lead the team of Patrick Reed and Patrick Cantlay by one stroke after 36 holes.

There’s a tie for the third spot between the teams of K.J Choi-Charlie Wi and Troy Merritt-Robert Streb. Both are at 13-under-par.

Rounding out the top-5 is a logjam of six teams, including round one co-leaders Jordan Spieth and Ryan Palmer. The Texas duo fired a second-consecutive 66 and stands at 12-under, along with five other teams.

The final cut in New Orleans was 7-under, and several of the so-called ‘power teams’ will be flying out of Louisiana earlier than expected, including the teams of Henrik Stenson-Justin Rose (-6), Jason Day-Rickie Fowler (-5), and Daniel Berger-Thomas-Pieters (-4).

Best ball brought plenty of low scores on Friday at the @Zurich_Classic.

“Jonas is playing really well at the moment. You know he’s going to make a birdie or par, so I’m just playing aggressive and letting it all fall into play.”
–Cameron Smith

“I think the format is a unique format. Missing the cut is not what we wanted, but walking away from this, I think they’re heading in the right direction with regards to a different format that adds more flavor to the PGA Tour.”
–Jason Day

The PGA Tour issued a penalty for slow play for the first time since 1995 (Glen Day at the 1995 Honda Classic). Brian Campbell and Miguel Angel Carballo received a one-stroke penalty during the first round of foursomes (alternate shot).